Lo-fi realist director Matt Porterfield returns to the public eye with third feature and Berlin Film Festival entrant I Used to Be Darker (2013), a sombre and incredibly despondent look at the declining sanctity of traditional family values in contemporary American society, told from the wide-eyed and innocent perspective of a young Northern Irish girl visiting her distant family. After making a life-changing discovery of her own, Taryn (Deragh Campbell) flees the small coastal town she’s recently made her home (after also running away from her parents) and seeks refuge with her accommodating relatives in Baltimore, USA.

Taryn’s aunt and uncle are both fading country musicians who have found themselves at the crossroads of their relationship – with her aunt Kim (real-life country star Kim Taylor) moving out in order to continue her music career, whilst her husband Bill (Ned Oldham) has resigned himself to the conventional 9-5 life he’s fashioned in order to “pay the bills”. Both Taryn’s arrival and their daughter’s return home from college only amplify their marital disharmony further. With all these factors happening at once, the formerly warm and welcoming Baltimore home finds itself in a state of confusion and disarray. 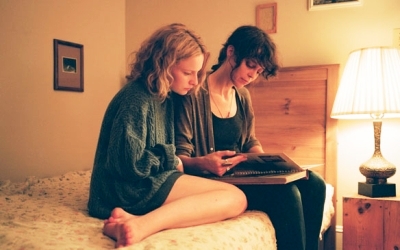 Porterfield’s gentle and probing camera follows this fractured family dynamic with an unobtrusive gaze that reveals every subtly mannerism and emotion that’s irritatingly absent from the script. This unrelenting dedication to realism throughout I Used to Be Darker has sadly fashioned a sterile and cold examination of a ruptured household, relying on the hyper-emotive music of Kim and Bill to express the myriad of confused emotions each character is attempting to deal with, yet ultimately unable to articulate satisfyingly. This divisive directorial approach ultimately culminates in a film that lacks any natural vivacity, with dramatic occurrences an afterthought in a work so full of passive aggressive sentiment.

However, thanks to a conventional three-act narrative that fails to come to life at any point, this cauldron of repressed angst simply simmers to a lacklustre conclusion. Initially, Porterfield allows us to witness this crumbling household through the perspective of Taryn, whose own life has all the necessary components for a gritty piece of realist drama. Sadly, Campbell is given very little to work with, turning her into a rather bland and uninteresting protagonist who’s difficult to engage with. Taryn’s transient lifestyle and precarious situation is given as the film’s overriding metaphor for the collapse of the traditional family dynamic and the difficulty of being a mother, yet this never feels fully formed.

Depending on your own personal preference for Taylor’s dour wailing, I Used to Be Darker is a prime example of how easy it is for lo-fi indie films to go terribly wrong. Lacking the chemistry of recent highlights of the genre such as Exit Elena (2012) and The Unspeakable Act (2012), Porterfield’s third directorial venture boasts all the necessary ingredients for a compelling family drama, yet lacks the catalyst to bring it all to life.