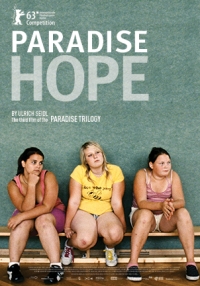 Originally conceived as one 130-minute feature film, Paradise: Hope (2013) sees 60-year-old Austrian director Ulrich Seidl (2007’s Import/Export) complete his trilogy of films inspired by Odon von Horvath’s 1932 play Faith, Hope and Charity. The final chapter in the trilogy leaves us with the remaining young girl of the three women whose stories comprise this peculiar examination of these vague and ambiguous themes. Overweight and curious, thirteen year old Melanie is spending her summer holiday at an Austrian fat camp whilst her mother and sister embark on their own irregular excursions.

At camp, she makes friends with her roommates with whom she has pillow fights, smuggles sweets and talks about sex. More importantly she also develops a crush on the camp’s 50-year-old doctor. This juvenile obsession grows into Melanie’s first true love and whilst the senior physician whose the object of her affections initially warms to her advances, he rapidly becomes aware that she’s quickly discovering her inherent feminine seductive powers and will do anything to win him over. 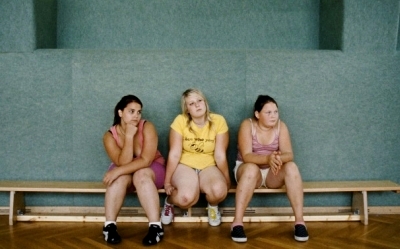 Using the same minimalist scripting and use of amateur actors as his previous films, Paradise: Hope retains all the characteristics and style of Seidl’s previous outings. That said, whilst the droll, dry humour on show remains just as nervous and unethical, this final chapter in this controversial trilogy is a far more humane and fittingly optimistic conclusion compared to its previous segments. Ostensibly a coming-of-age tale set against a backdrop of oppression and rejection, Seidl takes his unflinching approach and dilutes it appropriately for this juvenile scenario – culminating in a far less confrontational and abrasive film that simultaneously loses none of Seidl’s darkly comedic sensibilities.

Seidl’s distinctive style has already won him much acclaim on the festival circuit, and Paradise: Hope is no different. Utilising the same languid approach, coupled with his generous use of static, symmetric shots, the film has an endearing aesthetic that only amplifies the stories peculiar comicality. A stark and uncomfortable ride that constantly snares you within its suffocating framing, Paradise: Hope combines the claustrophobic composition of a Scandinavian noir with the minimalist drollness of an Eastern European comedy – no more so than the camp’s dietician’s hilarious, yet strangely sterile group rendition of ‘If you’re happy and you know it, clap your fat’. Like an uneasy, surrealist sitcom, Seidl’s latest is anything but an easy watch.

Constantly teasing you with the possibility of a liberating revelation for the film’s central protagonist, Seidl quickly pulls away any hope or redemption from you like a sick, twisted joke. A fascinating examination of our inherent desire for love, Paradise: Hope is an engaging film that, whilst lacking in any sensuality or sentimentality, somehow manages to capture your attention and draw your eye to the brief flicker of hope that burns ever so dimly behind its stark and uncomfortable veneer.