It comes at a delicate time in Chinese history, and as the winds of change become ever more apparent, the hope of finding a worthy successor to Master Yuitan is becoming more and more doubtful.  Ip Man is chosen to fight for this prestigious mantle, however, the master’s daughter Gong Er (Zhang Ziyi) stands in his way, and whilst she manages to defeat him, their intense duel sows the seeds of a unrequited romance. 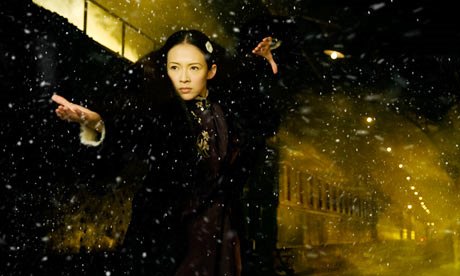 The Grandmaster is as much about the transition of martial arts, from a way of life to a series of high street schools and escapists forms of entertainment, as it is a love story told through the ages. Held in distribution purgatory due to numerous cuts and re-cuts, it’s clear to see the Kar-wai clearly had a more ambitious and epic story to tell than we see here. Characters are sadly made into mere narrative ciphers, ultimately culminating in the on-screen love affair becoming little more than an elegant chess game played in the background between to silent adversaries – albeit two competitors whose passions for each other run deeper than mere rivalry.

As to be expected, The Grandmaster is a visual treat, and Kar-wai’s ability to create an arresting backdrop of ethereal colours and soft lilting light against a stark pallet of greys and blacks culminates in a film that aesthetically rivals the most spellbinding and hypnotic of films. However, whilst The Grandmaster boasts an eye-catching degree of visual beauty and fight scenes that combine both the energy and acrobatic grace of 1999’s The Matrix and Crouching Tiger, Hidden Dragon (2000) (with each battle shot through a range of angles and meticulously choreographed), there’s no denying that the script has been left to disintegrate under a pile of dried blood, broken glass and crushed bones.

Sadly, this clinical and listless tale becomes a rather exhaustive affair all too quickly, with even the film’s mesmerising fight sequences becoming noticeably repetitive and diluted by their uneven and disjointed narrative framework. Kar-wai’s thematic detour has seen him lose none of his cinematic grace and panache, yet somehow his elegant style fails to coalesce with the film’s grandiose saga, lacking the intimacy of his previous work and ultimately resulting in little more than a mediocre attempt at a biopic, beautifully disguised as a ballet for the demise of kung-fu as a tradition.