Adam Sandler returns to the world of animation for the first time since 2002’s ill-received Eight Crazy Nights. That film was a crude and joyless affair, featuring the same off-putting mix of gross-out and sentiment synonymous with Sandler’s recent live-action work. Thankfully, he lends only his voice to proceedings here, although regular cast members from his films, Kevin James, David Spade and Steve Buscemi also crop up (Rob Schneider must have been suffering from laryngitis). The absence of Sandler donning the producer and writers hat is entirely welcoming, as Hotel Transylvania (2012) is a surprisingly engaging kid’s film.

Even Sandler makes a surprisingly good fist of the vocal work, playing the role of Dracula and using that familiar Bela Lugosi affectation, yet bringing a warm and humour to it. In the film, Drac is the proprietor of the titular Romanian getaway, which offers relaxation and sanctuary for ghouls and monsters of all shapes and sizes from humans, whom they all mistakenly believe to be the dangerous and frightening ones. 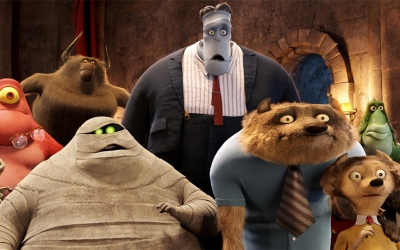 Dracula tries his best to perpetuate that myth as a means of ensuring his young daughter Mavis won’t (literally) fly the coop and explore the world outside of the hotel. Fate rears its head, however, on the day of her 118th birthday celebrations when a twenty-something human backpacker named Jonathan stubbles upon the premises. The two immediately go all gooey eyed for each other, much to daddy’s exasperation, who is also desperately trying to hide the truth about his visitor from the other patrons and his friends who are in attendance (including his best buds, Frankenstein and Wayne Werewolf).

Hotel Transylvania marks the big-screen debut of famed Soviet-born director Genndy Tartakovsky, and like this work on TV shows such as Samurai Jack and The Powerpuff Girls, there’s a pleasingly dynamic characteristic to the animation. The script comes courtesy of past Sandler collaborator Robert Smigel and Britain’s own Peter Baynham, a veteran of Chris Morris’ TV work and co-writer of Borat (2006). You can almost pick out who was tasked with providing the darker moments of humour, and the one who was in charge of delivering the requisite syrupy, audience friendly platitudes.

While the story itself doesn’t have much in the way of scope, and it’s entirely predictable from the very outset, this is an amiable effort which manages to be infinitely more entertaining and humorous than the majority of Sandler’s live-action productivity. Further enlivened by a playful and willing supporting cast (including an excitable Cee Lo Green as another of Dracula’s inner circle of chums, Murray the Mummy) Hotel Transylvania can be filed under that type of kids feature where the adults are kept equally entertained throughout.