Sparkle (2012) is a remake of the 1976 film of the same name. Dreamgirls (2006) launched the movie career of American Idol alumnus Jennifer Hudson, and this similar effort attempts to replicate the success for Idol winner Jordin Sparks. Unexpectedly, Salim Akil’s feature received most media interest due to it being six-time Grammy Award-winning Whitney Houston’s fifth and final feature film role before her untimely death on 11 February 2012, three months after shooting ended. Dedicated to her memory, Sparkle tells the story of an aspiring singer/songwriter (Sparks), whose dreams to be a singing star seem almost impossible.

The late Houston plays the over-protective and over-bearing matriarch who rules her three daughters with a biblical fist and discourages them against the pitfalls of the music industry. An ambitious young man called Stix (Derek Luke) encourages Sparkle to form a trio with her siblings, Sister (Carmen Ejogo) and Dolores (Tika Sumpter). However, as success approaches fast so do the dark temptations that break the family’s bond and tear a young girl’s life to pieces. 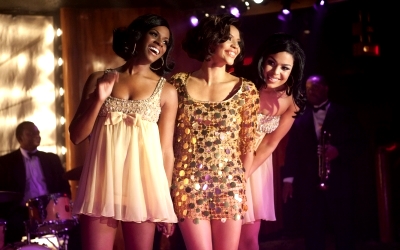 Sparkle begins slowly, with an incongruously shoe-horned performance by Cee Lo Green and proceeds warily, resulting in an obvious lack of ambition and stylistic coherency from Akil. The plot, while seemingly formulaic, is predictable up to a point and then with a hefty swing of a fire-poker, the film takes a welcome and unexpected turn that manages to maintain audience interest until the end. Although she is cast as the lead, Sparks fails to ignite in her prime role. No doubt about it, the girl can sing, but viewers may find it hard to engage with her prosaic character when her co-stars have more meat in their roles and more conviction in their delivery. However, Houston is definitely the draw here.

Although Houston’s disapproving, yet predictable character is certainly nothing new, the parallels between the singer’s real life and the journey of on-screen daughter Sister are fascinating. “Was my life not enough of a cautionary tale for you?” she asks her daughters leaving real-life implications hanging over the cast like a dark cloud. However, it is from this warning that Sparkle’s true star gets to shine. Carmen Ejogo as fame-hungry Sister delivers the film’s greatest performance and the plot’s heaviest burden. Domestic abuse and drug addiction are tackled with the clunky directorial flair of a daytime TV movie, but Ejogo takes the bull by the horns and rises above soap-opera histrionics to deliver a powerful performance that far exceeds the ability of her co-stars and the overall the quality of the film.

For all of its faults, Akil’s Sparkle remains watchable and gently entertaining and it works well as a showcase for talent (Ejogo’s acting and Sparks’ singing) and as a poignant goodbye to Houston. But, it will certainly not launch the movie career of its lead actress. The film reaches its dramatic peak at the halfway point, which ultimately results in less of a sparkle and more of a lacklustre matte finish.