The success/failure of The Guilt Trip (2012) rests entirely upon the mismatched pairing of international doyenne Barbra Streisand and Judd Apatow disciple Seth Rogen. Streisand, in her first starring role in 15 years, plays the widowed Joyce Brewster, a stereotypical Jewish mother – gabbling, smothering and parsimonious – and Rogen is her affable son, Andy, who’s struggling to market an eco-friendly cleaning product. When Andy visits his mother in New Jersey, she tells him about the ‘one that got away’ before she married his father, and Andy, after secretly finding his address in San Francisco, invites her on a road trip to reacquaint them. 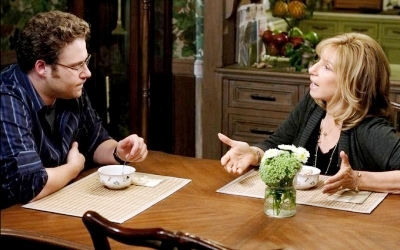 The journey contains all the uncomfortable interactions one would expect from such close proximity of mother and son: Joyce graphically reminds Andy of that time his penis turned purple, she puts on an audiobook for menopausal women in the car, and they get confused for boyfriend and girlfriend. But for all their prodding and kvetching, the humour is as timid as a Sunday drive. Their stops along the road – at motels, a strip club and a casino – set up comic opportunities only to let them flounder. Even a scene at a Texas steakhouse, where Streisand tries to finish a 50oz steak to get it for free, turns out to be frustratingly bland and chewy.

The Guilt Trip could have been a satirical comedy about overbearing mothers and emasculated sons with Oedipal/Freudian overtones but director Anne Fletcher and screenwriter Dan Fogelman never allow their characters to acquire those dimensions. Instead the tight focus on Streisand and Rogen – with fleeting support from Yvonne Strahovski as an unlikely ex-girlfriend and Brett Cullen as a charming cowboy – yields information about the past that allows them to come to an understanding of their filial relationship.

Released in time for Mother’s Day, this is a mother and son date movie with a well-meaning and inoffensive narrative unlike Streisand’s last film, Little Fockers (2010), or the scatological teen comedies Rogen has made his name on. Although both Streisand and Rogen are cruising in neutral on an incredibly straight road, there is an earnestness and sensitivity here that will be endearing to the softer of mums. For everyone else, Fletcher’s The Guilt Trip will appear a pat, old-fashioned comedy that fails to capitalise on the substantial potential for humour of its leading duo.