The financial crisis has been painful for many industries, but the global movie business seems to be growing. Technology has moved forward in great leaps and bounds, so that films look sleeker and run more smoothly. But for some, the issue of product placement has spoilt the purity of cinema. From the classic chic of 1962’s Dr. No and 1963’s From Russia with Love to Sam Mendes’ dark and thrilling Skyfall (2012), the James Bond franchise has always kept abreast of the cinematic zeitgeist. The Bond films have made significant profits, but some commentators have accused the producers of indulging in blatant product placement. In fact, advertising revenue covered roughly a third of Skyfall’s estimated £93.7m budget.

In a bid for lucrative sponsorship deals, the film industry could be accused of having compromised integrity and impartiality. We now notice that Bond uses Sony Ericsson phones, wears Omega watches and owns Sony TVs. And let’s not forget the customary Aston Martin, a staple of Bond since 1964’s Goldfinger. However, it’s precisely staples such as this that make Bond an appealing and credible character: he’s a stylish man, and we know that he is because he uses stylish brands. Without the brands, he’s simply charming – a quality that perhaps only Sean Connery could convert into style. 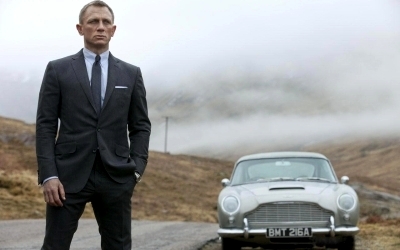 Financial incentives, as Wayne’s World (1992) hilariously reminded us, are certainly a major factor in film, but in cases such as the Bond franchise, branding can lend realism and romanticism too. We all wish we could cruise through the Alps in our classic car, customised gadgets in hand, sipping a dry Martini – it’s these flourishes for which Bond is known. We can accuse the industry of selling out, but where should the line be drawn?

There’s a balance to be found somewhere in between ignoring the existence of brands completely and making a two-hour advert for an electronics company. The makers of Bond do seem to take care to only include products where they seem appropriate – Bond might not often use a laptop when he’s confronting villains and wooing glamorous women, but you might notice that Q has a shiny Sony Vaio. Ideally, the product placement would be subtle and used sparingly but unfortunately, as with most industries, the policy is money-driven. Minus sponsorship from brands, film’s budgets would go down, and with deflated budgets come less impressive special effects and rushed edit jobs.

Without product placement, there could be a danger that films like Skyfall might not be able to achieve the high production values that pull in the large audiences they need to attract – and without those large audiences there would be nobody to complain about product placement. After all, we might complain far more if we saw 007 shopping around for off-the-peg suits and cheap electronics brands. It just isn’t his style.