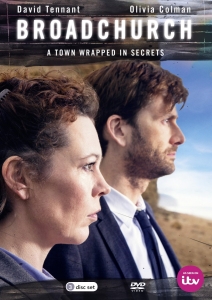 The recycled storyline of outsiders invading close-knit communities, particular ones that are odd due to their remoteness, is espoused by Chris Chibnail for his eight-part ITV crime drama Broadchurch (out now on DVD). Set amongst the idyllic cliffs of the Jurassic Coast, the fundamental premise is that a beautiful landscape and its similarly faultless townsfolk are devastated by tragedy. To its credit, the series is instantly disquieting, as incoming DI Alec Hardy (David Tennant) and partner DS Ellie Miller (Olivia Colman) discover the body of Danny Latimer, a local boy who has seemingly committed suicide. 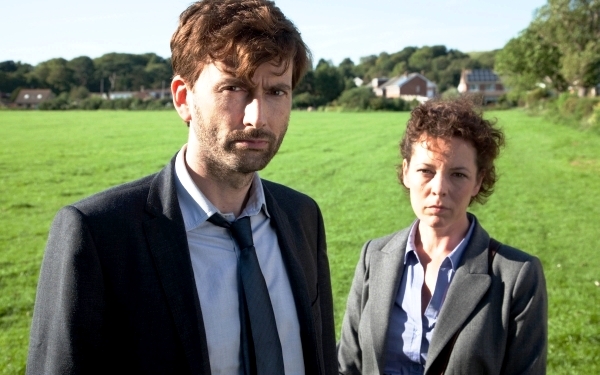 When foul play is suspected in the Latimer case, a search ensues to find the boy’s anonymous killer, pointing the finger at almost every character we encounter. The two detectives, played by Tennant and Colman, are the stars of the show. Miller is overlooked for promotion, much to her disbelief, and Hardy is shipped in from afar despite his incompetent reputation. It’s a hugely successful partnership, Colman (Tyrannosaur) once again delivering an outstandingly emotional performance. Similarly, the characters create the real drama; people are split into categories – police, journalists, family units etc. – to allow for investigation into their worlds (the most triumphant idea in the show).

The series however lies somewhere between Midsomer Murders and The Killing, far darker than the former but not as nuanced as the latter. Broadchurch has indeed been aligned with Veena Sud’s American crime drama (more accurately Soren Sveistrup’s Forbrydelsen), but the fish-eye perspective of a small town overwhelmed by widespread censure doesn’t quite sit right. The sinister atmosphere recalls the early films of Peter Weir, full of ghostly moods and unanswered plot threads, without getting under the skin of why this outwardly close community falls apart. The episodes follow the straightforward whodunnit – which makes for a hypnotising slice of fiction – but there’s a greater urge to mine the psyche of these characters.

Broadchurch soundtrack and camera angles do often force the tension, unnecessarily as the storyline is strong enough. Light, concluding piano music is mixed with twitchy shots, as if the camera itself is nervous, which are painfully obvious devices. Many may find that these aspects add to the thrill but we’ve become so spoilt with high-quality international dramas in the last decade, this lack of subtlety lets it down. Chibnail has created an extraordinarily watchable and exciting procedural, which walks towards the precipice of success but stumbles on the way.