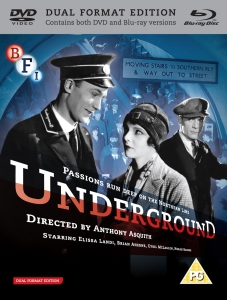 In 1928, at the tender age of just 28 years, British director Anthony Asquith was already a driven and passionate filmmaker – exactly what he brought to his early silent, Underground (1928). This tale, whilst saturated in its own time, carries a modern note, as underground carriages bustle with nosey travellers leaning over each others shoulders to read their neighbour’s newspaper, or young men eye up the ladies. Amidst the hustle of daily commutes we find a pair of lovebirds in the form of mild-mannered Bill (Brian Aherne) who works as an underground porter and shop worker Nell (Elissa Landi).

The pair’s fledgling love is thrown into disarray by the brash Burt (Cyril McLaglen), who also has eyes for the working class blonde bombshell. Power station worker Burt, with his rough manners and penchant for drink, hatches a plan with former lover Kate (Norah Baring), that climaxes in a tremendous, Bond-style chase sequence. Asquith – a contemporary of the young Alfred Hitchcock – demonstrates a tremendous talent for storytelling that should win over even the sceptics who have dismissed him as merely an ‘actor’s director’. He brings out excellent performances from the cast that immediately bring us onside with the charming hero, whilst riled against the brash antagonist. 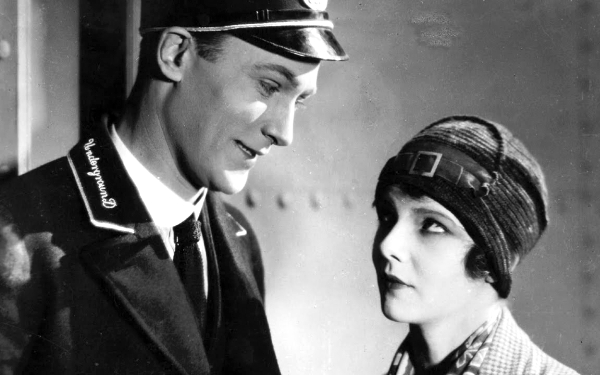 Full of youthful exuberance, Asquith certainly takes the lively, sprightly Underground in some surprising new directions. Landi breaks away from being a mere love interest into a leather-clad crusader, determined to find the truth by stalking the streets of London for seamstress Kate – the only one who can help her in her mission. Elements of German Expression, not dissimilar to the masterful Fritz Lang’s Mabuse series, are used by Asquith, drawing upon his experience at German studio UFA. Low-angled looming shots of the escalators and a playful use of shadows add to the argument that Asquith possessed a creditable understanding of cinema and wasn’t solely reliant on performances for the quality of his films.

Whilst the initial act is contained in the labyrinthine London Underground network, we also have a dreamy foray in a park that sees the lovers liberated from the subterranean world of shadows and dirt. This creates a pleasing cross over of thriller-come-romance that walks a thin line of being tonally conflicted. It’s all glued together by the excellent characterisation and plot that rattles along with pleasing pace and gentle comic interludes, only waning in the second act in a brief break from effectiveness.

This rerelease from the BFI is part of the celebration of the 150th anniversary of the London Underground, taking place this year throughout the capital. Silent film aficionado and music maestro Neil Brand was also commissioned to produce a new score for the film, performed here by the BBC Symphony Orchestra. Wider audiences rarely enjoy silent films – thankfully Underground should make for a tremendous introduction to the period of enjoyable early British cinema, which celebrates the tube and the people who use it.