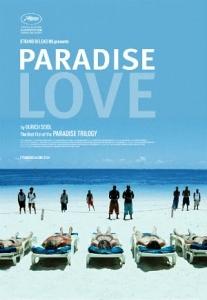 ★★★☆☆
The inaugural part of Austrian provocateur Ulrich Seidl’s Paradise trilogy (with all three films receiving staggered releases in the coming months), Paradise: Love (Paradies: Liebe, 2012) is a bitter first dose of squirm-inducing realism. Focusing on one rotund holiday-goer’s adventures as a sex tourist on the Kenyan coast, Seidl certainly doesn’t shy away from the controversial, exploring themes of racial exploitation and societal injustice within a beach community bloated by its own troubling contradictions. Thankfully, this first entry still somehow manages to remain as enthralling as it is excruciating, despite its languid pace.

Known on the glistening white beaches of Kenya’s coastlines as ‘sugar mamas’, numerous predatory European women have made a habit of embarking on sex tourist vacations, seeking out the attentions of young African men who sell love (well, sex) in order to earn a living and provide for their dependants. Fifty-year-old Austrian single mother Teresa (an oddly compelling Margarete Tiesel) travels to this perceived utopia in search of affection and enrichment, but quickly discovers that the muscular black locals are not the only party being exploited in this fabricated idyll. 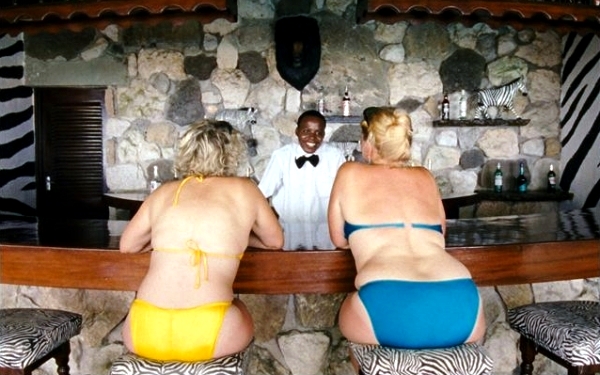 Having premièred to mixed critical reaction at the 2012 Cannes Film Festival, it’s not difficult to see why Seidl’s Paradise trilogy has taken so long to secure the aid of a bold UK arthouse distributor. Still arguably best known for his 2007 effort Import/Export, Seidl has spent much of his career in the shadow of fellow Austrian luminary Michael Haneke – though comparisons between the two are tricky to collate. What is notable within the first few frames of Paradise: Love is just how entrenched Seidl still remains in the documentary form, with the rest of the film playing out like a narrator-less fly-on-the-wall expose rather than a fiction. What is clear, however, is that at no point are we expected to be either comfortable or complacent.

Like Haneke, Seidl’s directorial approach is one of harsh truths through cinematic lies. Soon after Teresa arrives at her luxury hotel, she is accosted by fellow German speakers who regale her with stories of their sexual exploits, ever on the edge of grotesque racial derogation. Sat at a beach bar with a yellow-bikinied accomplice, Teresa and co. mock their beaming black barman, likening his ‘shiny skin’ to “speckschwarte” (bacon rind) whilst eyeing him up like a piece of butcher’s meat. Yet, as the plot thickens, Teresa begins to get a taste of her own acrid medicine, as the young and attractive Munga (Peter Kazungu) expertly extracts every last shilling out of his ignorant lay.

Brief flecks of cringe-inducing humour help to keep this societal indictment on the right side of satirical damnation, but there is a worrying sense that Paradise: Love’s blank nihilism may end up repulsing more than it draws in. Just how much Seidl actually values his characters is also up for debate, with humanity as a whole coming away from the whole ordeal with little of its dignity left intact (one particular scene involving a local stripper-gram could well be the final straw for many). A litmus test for the trilogy as a whole, Love ultimately revolves around anything but.

Follow the links for reviews of Ulrich Seidl’s Paradise: Faith and Paradise: Hope.