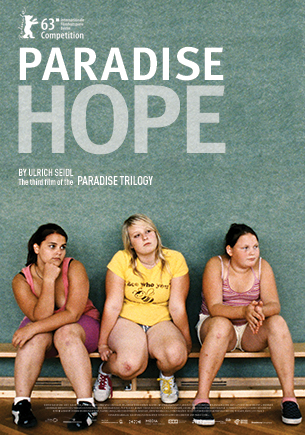 ★★☆☆☆
Bringing Austrian director Ulrich Seidl’s painfully naturalistic Paradise trilogy to a somewhat dismal dénouement, Paradise: Hope (Paradies: Hoffnung, 2013) sees Melanie (Melanie Lenz) – daughter of Love lead Teresa – packed off to fat camp to shed some excess pounds. Drawn in to a troubling relationship with the camp’s director, Seidl once again throws caution to the wind and clinically presents another social scenario where misery and heartache seem the only possible outcomes. Far weaker than the two previous chapters, Hope gropes hopelessly for provocation, but instead finds only tedious, highfalutin banality. 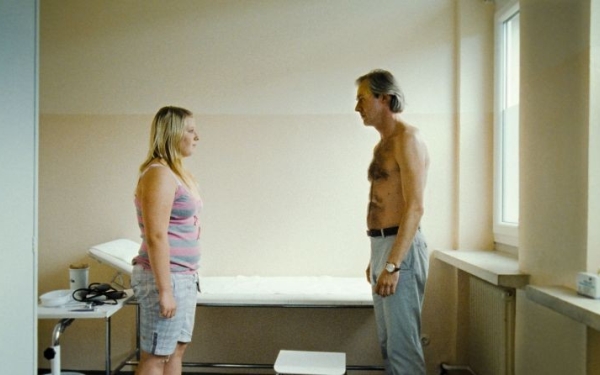 With her mother off holidaying as a sex tourist on the Kenyan coast, Melanie leaves the deeply religious environs of her missionary auntie Anna Marie’s house (see Paradise: Faith) for a teenage diet camp situated on the outskirts of an unnamed Austrian town. Placed in a room with three other like-minded girls of a similar age, Melanie puts the gruelling daily workouts behind her in the evenings, chatting to her newfound friends about boys and dragging on contraband cigarettes. After an intense one-on-one with the camp’s director (Joseph Lorenz) in his office, our heroine finds herself falling for him – a man forty years her senior. We then see the effects that lust has upon Melanie, and the clumsy attempts made to win the doctor’s affections.

A trilogy that, in Seidl’s own words, portrays “three women trying to realise their unfulfilled dreams and desires”, the Paradise series certainly hasn’t been found lacking when it comes to graphic depictions of sex. Hope, in some ways, attempts to readdress the balance between love and lust by focusing on a young girl’s first experiences of heterosexual attraction. Yet predictably, by presenting the man of Melanie’s dreams as a greying paediatrician surrounded by children, Seidl is clearly and overtly flirting with inflammatory material. Though it’s assumed that Melanie is of legal age, the fact that many of her dieting companions look substantially younger – coupled with the camp director’s abuse of power – leaves scant room for either empathy or compassion.

There’s little doubt that Seidl enjoys his role as provocateur of the margins immensely. With his next project, The Basement, a film apparently based around the theme of “Austrian men and their basements”, it would appear that the dyed-in-the-wool documentarian is still keen to subvert (or indeed confirm) our best and worst expectations at each and every turn. However, after the tangible melancholy of Love and the frantic, zealous fallout of Faith, Hope’s Lolita-riffing fawning simply comes across as both boorish and lurid. A disappointing finale to an often trying triptych.

Follow the links for reviews of Ulrich Seidl’s Paradise: Love and Paradise: Faith.