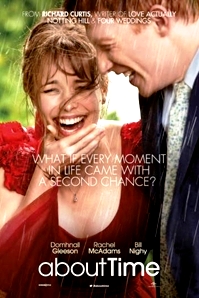 “For me, it was always going to be about love.” That’s Tim Lake (Domhnall Gleeson) in a voiceover at the start of Richard Curtis’ About Time (2013). On his 21st birthday, Tim discovers from his dad (Bill Nighy) that all the men in his family can time travel. What will he use the gift for, asks his father. “I’d like a girlfriend”, Tim replies. What follows is a string of bumbling attempts to get into the pants of Kate Moss devotee Mary (Rachel McAdams). Their first date is erased after some space-time shenanigans, so our fledgling Time Lord engineers subsequent meetings until they wind up in bed – a night that’s replayed over and over.

With Tim’s flux capacitor firmly in stud gear, this plot development feels like a faintly creepy addition to some highly predictable Curtis fluff, but both Gleeson and McAdams have enough charm to carry it off. Indeed, the two young actors are so energetic that they end up together within the first half-hour, leaving the rest of About Time with plenty of space to fill. Whilst the timey-wimey rom-com part seems wibbly-wobbly, the truth is that despite Tim’s protestations, Curtis’ latest isn’t about love at all – it’s about fatherhood. 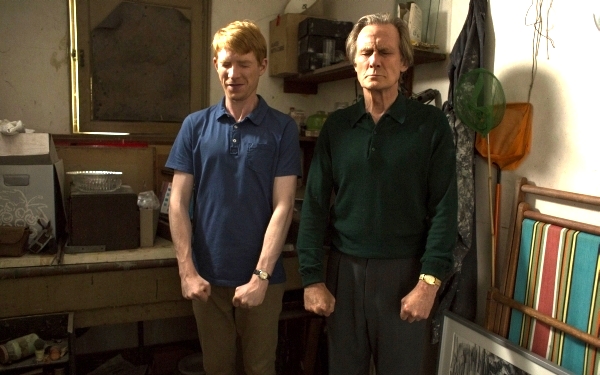 Nighy makes this clear the moment he walks on screen, all arms and eyebrows. Gleeson echoes him. Both standing with their hands in their pockets, with father and son the most natural couple in the movie. Pushing Mary aside, they soon come to dominate About Time. “Have we had this conversation before?” smiles Tim, after the time bomb has been dropped. There are several cute laughs across the two hours, but often the script feels like Curtis has travelled back himself to borrow beats from earlier films: a montage of Tim and Mary as seasons fly by; a troubled sister (the second act-hogging Kit Kat – Lydia Wilson); a sweary acquaintance (Tom Hollander as Tim’s comically bitter landlord); and, of course, the bumbling

Fortunately, the distinctive familiarity of Curtis’ world strangely suits About Time’s sci-fi tale: his is a parallel universe where time travel is possible, everyone is white and owns lots of real estate and all problems can be solved by a sentimental stroll along the beach. There are inconsistencies (a reliance on Chinese jokes and some flouting of that male-only rule) but Curtis is concerned with the emotional rather than theoretical impact of the physics. Ignore the boy-meets-girl posters: time travel is a chance for him to explore the temporary bond between father and son and, in a surprising move, the nature of inevitability itself.

That decision arguably makes this the most mature film of Curtis’ directorial career, even if its final message is rather trite. After years of perfecting which buttons to push, with his two men on top form, About Time’s machine-tooled, aggressive sentimentality is hard to resist. It may lack the weirdness of Terry Gilliam’s Time Bandits (1981), the wit of Robert Zemeckis’ Back to the Future trilogy or the weight of Shane Carruth’s Primer (2004), but About Time is inevitably moving stuff; a sci-fi for those who like a spoonful of sugar to help the paradoxes go down.