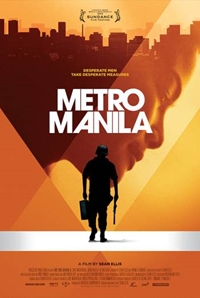 ★★★☆☆
British director Sean Ellis (Cashback, The Broken) swaps the comfortable environs of good ol’ Blighty for the mean streets of the Filipino capital with Metro Manila (2013), a sincere if somewhat inconsequential portrayal of one family’s beleaguered existence within the sprawling metropolis. Clearly indebted to the cinema of Scorsese (amongst others), Ellis’ latest is a significant leap forward in terms of the filmmaker’s own personal development, effectively drawing its audience into a volatile world of corruption and violence where the strong prosper and the weak face a daily struggle to survive life in the city’s slums. 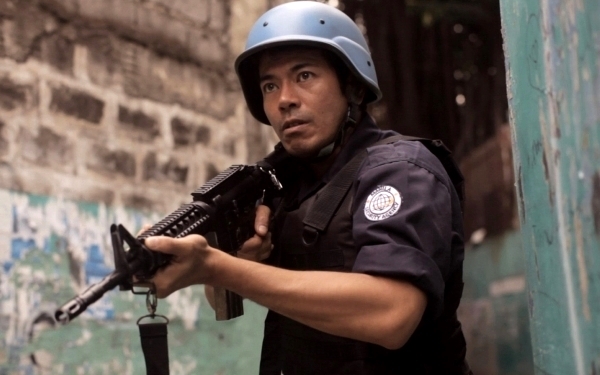 Unable to support their two young daughters on the poverty-stricken rice terraces of the Philippines’ Banaue Province, Oscar and Mai Ramirez (Jake Macapagal and Althea Vega) make the difficult decision to up sticks and relocate the family to the nation’s capital. Upon arrival in Manila, the naive farmers-by-trade prove easy game for all manner of nefarious types, each looking to exploit these vulnerable strays for immediate financial gain. After several unsuccessful attempts at finding work, Oscar eventually falls into a job as an armoured van driver, couriering large amounts of money from one location to another. One of Manila’s most dangerous professions, he soon finds himself in over his head.

Following a familiar rags-to-riches framework (albeit relative riches – a roof over the Ramirez’ head, in this case), Ellis’ third full feature is conservative in its approach, yet unarguably honest in its motivations. With exotic crime dramas now ever more frequent in UK cinemas thanks to past breakout hits including Fernando Meirelles’ benchmarking City of God and the Elite Squad series, it’s thus refreshing to see Metro Manila laud the little guy – the honest rice farmer unwilling to compromise his integrity in the face of greed and rampant criminality. This admirable approach is galvanised further by a quietly compelling performance from lead actor Macapagal, who lends Oscar an ingratiating air of humble stoicism.

Of course, as Ellis ratchets up his film’s growing sense of tension, Oscar becomes increasingly desperate to break free from Manila’s class-centric shackles, leading himself and former cop Ong (John Arcilla) to contemplate the unthinkable – stealing from those whom they have vowed to serve. At this point, Metro Manila does rapidly dwindle into rather generic fare, with the final obligatory shoot-out feeling overblown in a drama so previously reliant on subtlety and nuance. A subplot in which Mai take a job as a sex worker also seems out of place, cropping up now and again to remind us that this isn’t just Oscar’s story. However, flaws aside, there’s still enough here to keep you rooting for the sympathetic Ramirez clan.