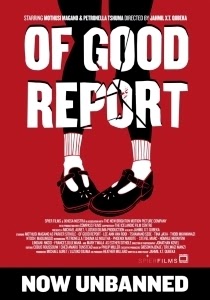 Rasping breath accompanies a pristine, monochrome shot from the point-of-view of a man stumbling across an area of scrubland. Two workmen stop to stare as he is revealed like some sub-Saharan gunslinger, pistol protruding from the top of his trousers, face and shirt awash with blood. A stark close-up follows his hand as he painfully extracts two teeth that have somehow been embedded in the top of his head; he laughs maniacally. Welcome to the weird and uncomfortably disturbing world of Jahmil X.T. Qubeka’s noirish, blackly comic tale of obsession, Of Good Report (2013), in show at this year’s LFF. 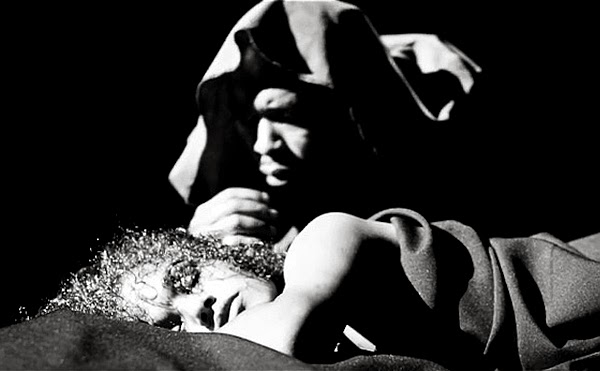 Briefly banned in its native South Africa, this is the provocative tale of teacher Parker Sithole (Mothusi Magano) who arrives at a small provincial school with the titular commendation. Without uttering a single line of dialogue, he commands attention from the get-go with his horrifying transformation from nebbish lecturer to a monstrous blend of Humbert Humbert and Norman Bates. Nabakov’s Lolita clearly provides great inspiration for Qubeka’s script with the object of Parker’s desire a coquettish schoolgirl, Nolitha (Petronella Tshuma). It’s the scars of an adolescence overshadowed by a domineering mother that prove the catalyst for Parker’s cracked psyche, however, and old wounds are reopened when Nolitha breaks things off.

The horror genre gets plenty of reference including a shadowy nod to Nosferatu (not the first at this year’s London Film Festival) hinting at the protagonist’s warped future. It’s a polished film with eye-catching direction and cinematography marking it out and its pop-culture literacy beginning early with a foreshadowing tip of the hat to television serial killer Dexter. The dizzying plunge into darkness is accentuated with Of Good Report’s macabre humour which rears its head with unexpected regularity. Parker’s silence soon becomes a source of comedy – he’s repeatedly interrupted with a word on his lips – but it is the more ghoulish moments that illicit nervous laughter and heighten the unpleasantness.

One prime example of the above is a piece of slapstick – Parker falling over and struggling to regain his footing – set in a room slick with blood. Magano handles these elements with as much aplomb as his more threatening moments. Between its stylish and stylised visuals, its spot-on performances and its liberally-tapped vein of unsettling humour, Of Good Report certainly warrants its self-reviewing name. A fiendishly entrancing Hitchcockian thriller containing challenging subject matter and provoking an all the more visceral reaction with its generic trappings. Sithole may be an amalgam of Bates and Humbert, but he arguably becomes more diabolical than either.