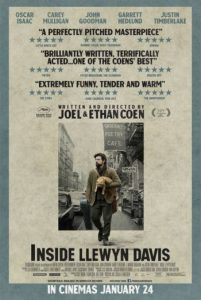 ★★★★★
Sadly – though perhaps predictably – overlooked amid this year’s raft of Oscar nominations, Inside Llewyn Davis (2013) thankfully doesn’t need lashings of awards to appeal to those who have admired the work of the brothers Coen over the course of the last three decades. Featuring a breakthrough lead turn from Oscar Isaac as a struggling folk singer, the Coens have returned to the high watermark of such classic efforts as Miller’s Crossing and Barton Fink with a tale of cats and calamity set against the wintry backdrop of the sixties Greenwich Village scene, where its key players orbit around a black hole of grief. 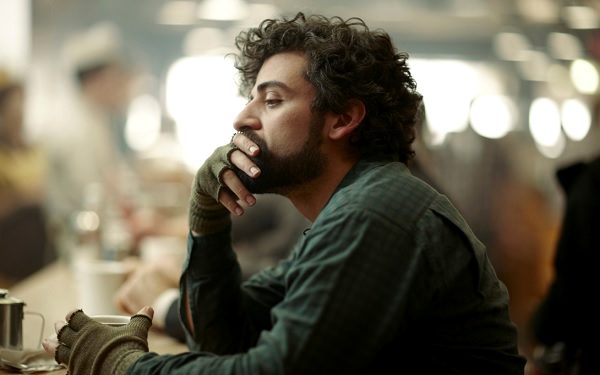 Caught in a seemingly never-ending loop of bar and club gigs, Llewyn (a revelatory Isaac) starts to feel that the times they are a-changin’. With hardly a cent to his name and without even a winter coat, Llewyn calls in favours from friends and acquaintances, like folk duo Jim and Jane (Justin Timberlake and a fine Carey Mulligan), as he desperately tries to scrape together enough money to jump-start his floundering career. Our Ulyssean protagonist’s multiple misadventures take him from the basket houses of the Village to the Chicago lair of music mogul Bud Grossman (F. Murray Abraham) and back again. Jumping from couch to couch like a hapless sailor shipwrecked at sea, thoughts of his past life in the merchant navy return.

Although many have pointed out aspects shared between Inside Llewyn Davis and the Coens’ revisionist take on Homer’s The Odyssey – the George Clooney sing-a-long O Brothers, Where Art Thou? (2000) – the past offering it perhaps resembles most is the aforementioned Palme d’Or winner, Barton Fink. Both films are transfixed by the dramatic possibility of life and art overlapping one another, and at several points Llewyn Davis certainly feels like its drawing itself inside its weary wanderer altogether, away from the fear of rejection and the trauma inflicted by the encroaching “modern”. When asked by on-off love interest Jane if he ever thinks about the future, Llewyn sarcastically replies “You mean like flying cars? Hotels on the moon? Tang?” For him, at least, it’s the present that counts – as miserable as it may be.

T-Bone Burnett’s exquisitely produced, diegetic musical accompaniment has become one of the film’s key selling points, with every track heard stemming either from a recording played on-screen or performed by Isaac, Mulligan, Timberlake or another of the ensemble cast (look out for Adam Driver, of Girls fame, as deep-voiced country singer Al Cody). Easily one of the best soundtracks of the last few years, Burnett, the Coens and Marcus Mumford’s bittersweet eulogies to Tudor queens and shoals of herring are as likely to induce a tear as they are to raise a wry smile, an effective microcosm for Inside Llewyn Davis’ overall dramedic sensibilities. As Dylan enters stage left at the film’s finale, a drunken Davis trudges out his once beloved Gaslight knowing only this: “If it was never new, and it never gets old, then it’s a folk song.”