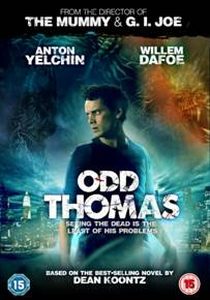 Based on the bestselling novel by American author Dean Koontz, Odd Thomas (2013) comes to UK DVD after a short legal battle quashed any possibility of a theatrical release. Directed by Stephen Sommers, whose mild-horror track record has been demonstrated with films such as The Mummy (1999) and Van Helsing (2004), this lively adaptation follows rising star Anton Yelchin in the titular role as a spatula-spinning, short order chef. However, juggling utensils is not his only talent as Odd Thomas – odd by name, odd by nature – has a somewhat overcooked sixth sense. In short, he sees dead people – lots of dead people. 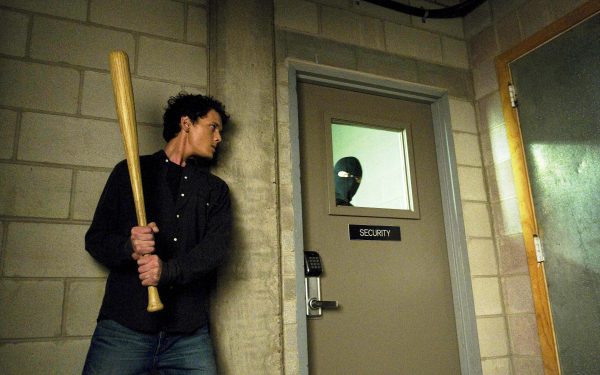 The cook’s clairvoyant abilities are put to good use by local police chief Wyatt Porter (Willem Dafoe), and when suspicions are raised regarding town newcomer Fungus Bob (Shuler Hensley) – the suspected key holder to the gates of hell themselves – Porter is soon hot on the case. Led by dreams and psychic intuition, Odd (Anton Yelchin) simultaneously uncovers a plot by a satanic cult who intend to kill the entire town. Along with his girlfriend, ice cream-scooper Stormy (Adonis Timlin), the pair begin their own investigation. The huge scale of the town’s imminent execution becomes increasingly apparent when Odd Thomas is haunted by visions of contorting shadowy ghouls that are only visible to himself.

Sommers wastes no time in hurling the viewer straight into the alternate universe of his protagonist. The exhilarating actions are accompanied by an extensive narrative delivered by Yelchin’s husky and confident tones. For those unfamiliar with the Koontz’s source material, the narrative provides additional information that at times feels like explanatory-overload but with a plot this complicated, narrative is a definite requirement. Sommers, who adapted the screenplay himself, is clearly passionate about his subject and packs a great deal in to the 90-minute runtime. His directorial flair is as energetic as the script – picture Back to the Future’s Hill Valley Town Square laden with Mummy-esque special effects.

Yelchin has the competence and charisma to carry a film from start to finish and Odd Thomas is no different. He fulfils the role as the alternative and enigmatic action hero but thanks to a surprising plot twist, he is also able to play the role from an affecting, emotional perspective that will tug at the heartstrings of any viewer with a pulse. The film is by no means perfect but it consists of the well measured formula of fellow ‘young adult’ horror movies, such as Something Wicked This Way Comes (1983) and Monster Squad (1987) and if it finds the audience it deserves, Odd Thomas most definitely has the potential to become a cult classic.