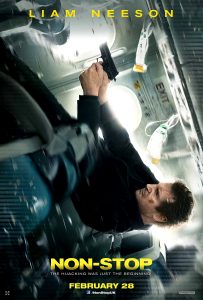 Action movies are typically a young man’s genre but an older man’s game. The real tough cookies have been thickened by years of experience, driven to solitude by guilt, and are embittered by the system they have operated in for too long. At the age of 61, Liam Neeson continues to rebrand himself as a sort of latter-day Charles Bronson with Non-Stop (2014), a deliriously silly doomed-airline thriller that’s all the right kinds of ridiculous. The latest in the new wave of Neesploitation films, he teams up again with Juame Collet-Serra, director of 2011 thriller Unknown, for more quasi-Hitchcockian second-guessing and shadow chasing. 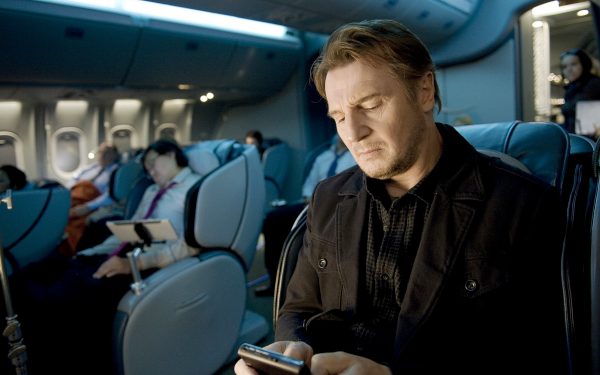 Neeson plays Bill Marks, a retired air marshal who we first see smoking in his car, stirring scotch into his tea with a toothbrush. Before take-off, Serra sets up some key relationships: Neeson grumbles with a fellow passenger, returns a young girl’s lost teddy bear, and starts to work his world-weary charm on Julianne Moore. In the air, someone on the plane starts texting Neeson, threatening to kill a passenger every twenty minutes unless $150 million is transferred into a bank account. No one can be discounted and much of the film is devoted to the impossible ways the villains manage to escape detection. The ridiculousness of it all cannot possibly be underplayed, but neither can its ability to take us along for the bumpiest of fun rides.

Neeson brings an unironic seriousness to the central role, which is essential for maintaining the suspense even as the implausibilities pile up. Director Serra keeps Non-Stop pace pleasingly brisk, diverting our attention to Neeson at every moment, instead of burdening us with the intricacies of things like logic and sense. By the time the final reveal comes, the true extent of our disbelief becomes apparent and the whodunit aspects give over to the allure of Neeson thundering up and down the aisles, slapping down one-liners.

Non-Stop hangs so heavily off the back of Neeson that it sweeps the legs from underneath its supporting cast, who have no personal gravitas of their own until Neeson beats it out of them. Michelle Dockery and Lupita Nyong’o (in a role surely filmed before Steve McQueen’s Oscar hopeful 12 Years a Slave) as the demure cabin crew, and turbulent passengers Scott McNairy, Nate Parker and Corey Stoll only really exist to arouse suspicion. In the end, Neeson is all you want to see, and for the purposes of this, is powerless to resist.