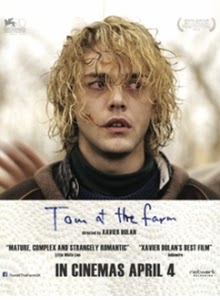 French-Canadian filmmaking prodigy Xavier Dolan (Heartbeats, I Killed My Mother) takes Oscar Wilde’s “The love that dare not speak its name” adage to new extremes in repression thriller Tom at the Farm (2013). Dolan inserts himself into the title role of Tom, an ad agency editor who finds himself in the backwaters of Canada for his dead boyfriend Guillaume’s funeral. Established in the creaky farmstead, Tom finds a wide-eyed, white-haired mother (Lise Roy), who is oblivious to her son’s homosexuality and more than a little off her rocker. Also present is the bullish Francis (Pierre-Yves Cardinal), a threatening figure who milks cows to mask his own latent desires.

Tonally bizarre, Dolan’s fourth feature may be his shortest to date but something has been lost, particularly when compared to his previous feature Lawrence Anyways (2012), which, whilst heavily flawed, showed more technical prowess and a sense of vision. With Tom at the Farm there are hilarious moments of black comedy, often surrounding the utter-ridiculousness of the situation, a particularly pleasing moment being a cocaine-fuelled tango in a barn. The story is based on a play by award-winning Canadian playwright Michel Marc Bouchard, who also wrote Lilies. Despite the rich source material, Dolan apes the tropes of hick horror blended with a psychological drama, laying it on thick, to a surprisingly hammy level.

The rural household feels like Cold Comfort Farm meets the Hewitt family from Texas Chainsaw Massacre (the 2003 version), by way of Hitchcock’s Psycho (1960). This heavy-handed approach is by no means entirely unsuccessful but does become tiresome. Sexuality and horror go hand in hand, the twist of using the idea of repressed homosexuality is certainly an intriguing one. Violence and sexuality have been explored on screen numerous times, yet Dolan brings a new, semi-successful twist. The over-blown strings from Gabriel Yared’s score do get in the way somewhat, but there’s also an enjoyable playfulness in the way he explores the character’s desires and the over-arching themes of the film.

However, many will soon find their patience wearing thin with this young director. Each time one of his films is released, excitement builds that he might finally give us the masterpiece that we have been chewing at the bit for. Sadly, Tom at the Farm isn’t it. At just 25 years of age, Dolan shows much promise and has at least learnt the value of a tighter edit.. As aware as Dolan is of what he has to do – and he certainly knows all the tricks of the trade – he still doesn’t hasn’t quite learned how to employ them to their greatest emotive effect.

This review was originally published on 12 October 2013 as part of our London Film Festival coverage.