★★★★★ Following on from its hugely successful world premiere at Sundance this year, Damien Chazelle’s second feature, Whiplash (2014), hits the Croisette showing in Directors’ Fortnight at Cannes. After catching the eye and winning plaudits for his impressive lead turn in The Spectacular Now (2013), Miles Teller plays Andrew, a Continue Reading

★★★☆☆ If one Nicole caught headlines earlier in the festival at the Palais with Olivier Dahan’s much-maligned bioflop Grace of Monaco (2014), better notices should find themselves in line for another Nicole a short walk down the Cannes Croisette as part of Directors’ Fortnight. That’s where Stéphane Lafleur’s Tu dors Continue Reading

★★☆☆☆ “This isn’t Saving Private Ryan,” a Russian soldier remarks to camera as one of his comrades films the aftermath of a battle and an ensuing massacre with a video camera. Yet, for all his latest offerings’s fleeting moments of gritty realism, Oscar-winning The Artist director Michel Hazanavicius’ The Search Continue Reading

★★☆☆☆ Screening in the Un Certain Regard sidebar at this year’s Cannes Film Festival, Jaime Rosales’ Beautiful Youth (2014) aspires to a gritty realism but its narrative slackness make it a gimmicky and occasionally complicit portrayal of Spanish love on the dole. Carlos (Carlos Rodríguez) and Natalia (Ingrid García Jonsson) Continue Reading

★☆☆☆☆ Adapted from the novel by Green Street scribe Dougie Brimson, Top Dog (2014) is the latest offering from Jonathan Sothcott’s Richwater Films, who seem intent on burying British independent cinema under a mountain of cockney gangster flicks and inferior horrors. Unfortunately for anyone with even a modicum of taste, there’s Continue Reading

★★★☆☆ The feature debut from Academy Award nominee Steph Green (New Boy), and starring Will Forte and Maxine Peake, Run & Jump (2013) is a humorous and often charming attempt to play on the lighter side of post-stroke care. Though not without its overly melodramatic moments, and relying a little Continue Reading

★★★★☆ Sini Anderson’s The Punk Singer (2013) uncovers the true origins of nineties ‘girl power’ and the birth of the Riot grrl movement. Kathleen Hanna, co-founder of the movement and frontman of Bikini Kill is the titular singer with the film documenting her career from start to a surprisingly abrupt Continue Reading 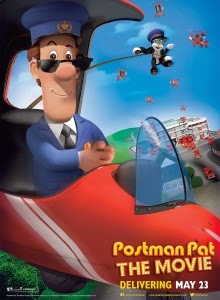 ★☆☆☆☆ After more than three decades entertaining children on TV, Postman Pat makes the transition to the big-screen in Postman Pat: The Movie (2014). The result is a lacklustre offering that comes as a far cry to the charming stop-motion TV series fostered by original creators John Cunliffe and Ivor Continue Reading

★★★☆☆ Despite an audacious scene near its midpoint that will undoubtedly prompt much tongue-wagging, Amat Escalante’s third feature, Heli (2013), is largely about just how commonplace unexceptional cruelty and bloodshed has become in his native Mexico. His previous film, Los Bastardos (2008), concerned a shocking act of violence committed impassively Continue Reading

★★★☆☆ Actor turned writer-director John Turturro’s Fading Gigolo (2013) offers up an outlandish concept, and despite some notable pitfalls, manages to navigate the territory with a wry charm and warmth. All of which is bolstered by the director’s use of common sense in casting Woody Allen to bring a dry Continue Reading

★☆☆☆☆ In 50 First Dates (2004), Drew Barrymore played a hapless singleton suffering from short-term memory loss who constantly forgets that she’s ever met Adam Sandler. Sadly, the rest of us aren’t so fortunate. Reuniting with The Wedding Singer (1998) director Frank Coraci, Sandler has wrangled Barrymore into co-starring alongside Continue Reading

★★☆☆☆ The most recent in a spate of mountaineering documentaries that have attempted to traverse the UK theatrical and home entertainment market of late (from the compelling The Epic of Everest to the misconceived The Summit), Beyond the Edge (2013) is the first to utilise 3D stereoscopy for its storytelling Continue Reading