Following on from its hugely successful world premiere at Sundance this year, Damien Chazelle’s second feature, Whiplash (2014), hits the Croisette showing in Directors’ Fortnight at Cannes. After catching the eye and winning plaudits for his impressive lead turn in The Spectacular Now (2013), Miles Teller plays Andrew, a dedicated young music student and drummer who finds himself under the tutelage of Terrence Fletcher (a career-topping performance by the wonderful J.K. Simmons). Andrew goes to the Shaffer Music Conservatory in New York – the number one school in the country – he idolises jazz legends such as Buddy Rich and practices hard, piquing the revered Fletcher’s interest.

When the invite comes to join Fletcher’s studio band, Andrew believes that his ambitions are about to be fulfilled and his hard work paid off in full. However, Fletcher proves to be the hardest taskmaster imaginable. More like a drill sergeant than an educator – the barnstorming boot camp scenes of Full Metal Jacket come to mind – Fletcher manipulates, bullies, goads and rips into his charges with a relentless glee and fury in the pursuit of musical excellence. If truth be told, the question lingering throughout the entirety of Chazelle’s film is how much Fletcher’s methods are genuinely motivated by a pure belief in excellence – he cites Charlie Parker’s early humiliation as a necessary moment in the creation of Parker’s genius – or if he’s simply a sadist who abuses the trust and ambition of his students and is hell-bent on their psychological destruction. 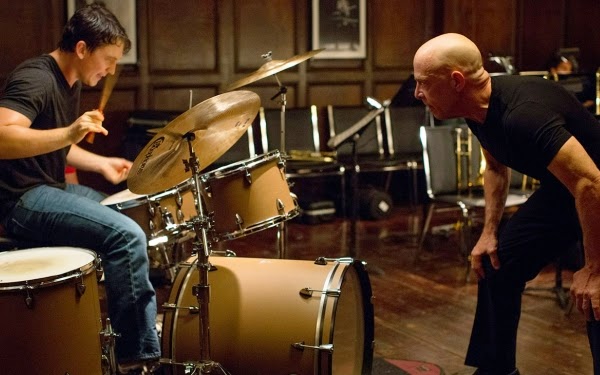 Fletcher’s abusive tirades are operatic and brilliantly delivered by Simmons, a frequently-seen character actor who now grabs this rare meaty co-lead with both hands and gnashing teeth. His razor wit, sheer outrageousness, inventive taunting and vulgar insults are at once appalling and blackly funny. In Andrew, he has found his perfect victim. It’s clear Andrew has little in his life except for drumming. He has no friends, but does go out to the cinema with his father (Paul Reiser) where he meets and tries for a fleeting romance with Nicole (Melissa Benoist), the girl at the popcorn concession. When he talks about drumming, Andrew is quick to alienate others with his contempt for the meagreness of their ambition compared to his own. In one particular scene, a family meal goes horribly, horribly wrong as our protagonist vehemently defends his art.

Fletcher exploits this obvious need and Andrew almost seems to revel in it, pushing himself further and further to prove himself worthy and better than the other students who Fletcher pitches against each other. Fletcher’s most vile strategy comes when he shows a glimmer of humanity, luring Andrew into confiding in him, only to use those confidences as ammunition for further abuse. Pretending patience for a moment, he then hurls a chair at Andrew’s head when he doesn’t keep time to his satisfaction. With his bald head and black clothes, Fletcher is a consciously intimidating and – like most teachers – slightly vain figure, pulling Andrew in only to slap him down, again and again and again. Not since Scott Hicks’s Shine (1996) has a film so effectively portrayed the abusive obsession with the pursuit of musical excellence.

Eschewing naturalism, Chazelle heightens the theatricality of Fletcher’s world, moving his camera with the music and photographing proceedings in an almost golden glow. He takes the music as seriously as Fletcher does, giving us very little to go on. His characters know what is being talked about and he isn’t going to slow down for us to catch up. Elsewhere, the Justin Hurwitz’s score makes wonderful use of the eponymous song to teach the audience the difference but just a ‘good job’ and excellent. Although a couple of narrative twists late on threaten to drum us into melodrama, Chazelle never misses a beat and the film builds to a cathartic crescendo. A supreme meditation on the encouragement of brilliance and the excesses of power, Whiplash is a stunning musical drama with a rhythm section to die for.

Whiplash featured in CineVue’s ‘Best films of 2014’ feature. You can read the full list here