★☆☆☆☆ It’s been almost two decades since idiosyncratic French filmmaker Patrice Leconte delivered a near-masterpiece in the form of 1996’s Ridicule, an opulent and hugely […]

★★★☆☆ Making a successful feature length cartoon is a hard nut to crack. For every animated hit, a dozen sink without trace, relegated to being […]

★★☆☆☆ French director Michel Gondry is well-known for his eccentricities and wild imagination. However, with his latest quirksome endeavour, Mood Indigo (2013), the director falls […]

★★★☆☆ Partially funded by Kickstarter, Daniel Patrick Carbone’s Hide Your Smiling Faces (2013) arrives in selected UK cinemas this week having picked up a number […]

★★☆☆☆ The second entry in a proposed trilogy from British independent director Gareth Jones (2009’s Desire being the inaugural chapter), Delight (2014) isn’t short on […]

★★★★★ Structures within the time frame of empirical perspectives have a tendency to unknowingly look in the wrong direction. Michael Cimino’s The Deer Hunter (1978) […]

★★★★☆ Coco Moodysson’s autobiographical 2008 graphic novel Never Goodnight related the delight and difficultly of forming a punk band, aged 13, in 1982. Along with […]

★★★☆☆ For Roman Polanski’s latest, the now octogenarian director has adapted David Ives play Venus in Fur, which is itself based on the 1870 novel […]

★★☆☆☆ Released to widespread critical and audience acclaim back in 1992, Clint Eastwood’s Oscar-winning revenge tale Unforgiven is fondly remembered as a valiant last stand […]

★★★☆☆ John Cassavetes was the blue-collard labourer of American arthouse. Like the atonal timbre of jazz that tested musical conventions, the director excelled when left […]

★★★★☆ Another forgotten gem given new life on DVD and Blu-ray here in the UK, John Guillermin’s Rapture (1965) is a beautifully-made and challenging oddity. […]

★★★☆☆ The second crime thriller to come from director Michael Noer (whose previous film, 2010’s R: Hit First, Hit Hardest, was a collaboration between himself […]

★★★★☆ Let it be howled from the mountain tops that with his extraordinary Noah (2014), director Darren Aronofsky has crafted a bold, phantasmagorical interpretation of […]

★★★★★ French critic and auteur François Truffaut’s tone and style have been both successfully and unsuccessfully mined by numerous directors over the years, including the […]

★★★☆☆ Fresh off the back of last year’s Drinking Buddies (2013), mumblecore forefather Joe Swanberg returns with Happy Christmas (2014), another modestly budgeted drama which […] 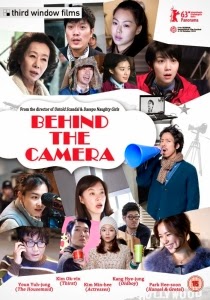 ★★★☆☆ E J-Yong’s Behind the Camera (2013) is a doc-style film that offers an intriguing question; can an absent filmmaker direct a cast and crew […]