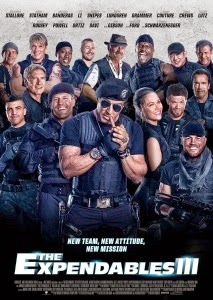 Sylvester Stallone and his ragtag team of aging action heroes return in the much-pirated The Expendables 3 (2014), the third and potentially final entry in the preposterous, testosterone-fuelled franchise. However, as persistent and mildly diverting as it proves on a surface level, this latest outing is pretty vacant underneath, with only the bare outlines of a script to sustain it over an exasperating two-hour-plus runtime. Under the helm of Red Hill (2010) director Patrick Hughes, The Expendables 3 finds Barney (Stallone) and his cronies back out on the field, only to come face-to-face with the evil Conrad Stonebanks (Mel Gibson, back from the wilderness), a formidable foe whom they believed to be KIA.

Accepting that his old crew are past their prime, Barney hires a younger, more tech-savvy crop of mercenaries to help him put an end to Stonebanks once and for all. But when they’re overpowered, both the young and the old are forced to band together to take the upper hand. These films have always been more entertaining to audiences through visuals and character interplay than delivering layered narratives. Even so, the apparent ‘script’ at the core of The Expendables 3 is so limp and transparent that it’s almost laughable to discover that there were three screenwriters – Katrin Benedikt and Creighton Rothenberger and Stallone himself – involved in its assembly. There’s only so much relentless action audiences can take before tiring of it (twenty minutes in this instance) before looking elsewhere.

The one thing besides the action that’s even remotely worthwhile? The characters and the banter they share. From series familiars Stallone, Jason Statham and Arnold Schwarzenegger to newbies like Harrison Ford, Kelsey Grammar and Kellan Lutz, there’s an action stalwart from every stage of life. Most of them bring their playfulness with them, but it’s Antonio Banderas who – surprisingly – proves to be the film’s biggest asset, having a complete and utter ball with his talk-a-mile-a-minute alternate persona Galgo, sending up many of his early roles. And yet, when all’s said and done, The Expendables 3 can’t rest its laurels entirely on its stars’ past achievements. Hughes’ sequel fails because it makes no attempts whatsoever to rise above its predicable formula, even with the new cast additions and a promising director. There was a time when the idea of action heroes bandied together was an entertaining prospect. Now that the idea has been rinsed dry, it may well be time for these doddering die-hards to be put out to pasture.