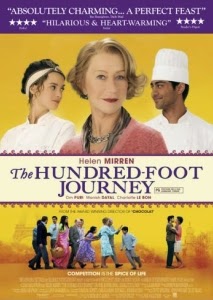 ★★☆☆☆ Lasse Hallström revisits familiar territory with The Hundred-Foot Journey (2014), a warmly lit but cloyingly corny and drama-free adaptation of Richard C. Morais’ novel of the same name. Talented cook Hassan (Manish Dayal) and his family – Papa (Om Puri) and his other children – are forced out of Continue Reading

★★★★☆ Rightly selected as the opening salvo of this year’s well-attended 15th Film4 FrightFest in London, fervently followed American genre director Adam Wingard’s The Guest (2014) had the difficult task of coming after the excellent besieged family bloodbath You’re Next (2013), which had audiences howling with delight back in in Continue Reading

★★★☆☆ The documentary deluge in which we are still mired is so often lazily acknowledged as “a positive thing”. Our collective, unblinking admiration for the typical combination of liberal politics and gentle educational zeal has conditioned us to accept the creeping homogenisation of a cinematic from. We see more and Continue Reading

★☆☆☆☆ Best summarised as a watered down Memento (2000) aimed firmly at the Richard and Judy’s Book Club crowd and based on the hugely successful novel of the same name by S.J. Watson, Rowan Joffe’s Before I Go to Sleep (2014) is the sort of weightless literary adaptation that simultaneously Continue Reading