Blu-ray Review: ‘A Farewell to Arms’ 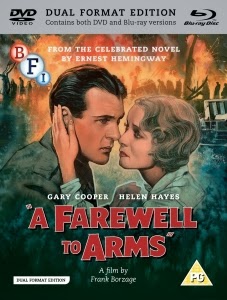 “Illicit love! Illegitimate birth! Desertion from the army!” cried the Hollywood censors at the prospect of bringing Ernest Hemingway’s A Farewell to Arms to the screen. “This is a magnificently written story and a great one but it is not a story for a picture.” It was the sort of renegade content that the 1930 Hays Code censorship guidelines had forbidden, but Frank Borzage’s 1932 film was one of the movies to escape intact (at least briefly). In 1938, by which time a proper body was created with sufficient resources to implement the Code, A Farewell to Arms was seen again, cut to ribbons and rereleased. Whichever way it appeared, Hemingway didn’t like it.

The writer was broadly contemptuous of any movie based on his work, even when it happened to be, in the case of A Farewell to Arms, the best. It also happens to be the furthest from its source, with Borzage eschewing the cold, hard masculinity of Hemingway’s prose in favour of his own sensual and passionate romanticism. So never the most natural of bedfellows then, yet they revealed hidden parts of each other here: Borzage brought out the essential melodrama of Hemingway’s story while Hemingway gave Borzage some of his richest, most ambiguous characters. Gary Cooper never played a stranger hero. His Frederick, a doting drunk, a deserter and (some would be right to argue) a rapist, falls in love with English nurse Catherine (Helen Hayes) while stationed in Italy during the First World War I.

As with many Borzage films, their love comes at terrible physical cost, as Frederick is injured in battle and Catherine is dying of hunger and loneliness. Borzage was enamoured by the idea that love can overcome war and famine, and become a form of faith; or that love can be eternal, beyond death, because then their romance is at its most mystifying, and their journey at its most transcendental. He was at once the most physical of film-makers and one who did so much of his work on the surface. The seductive cinematography by Charles Lang has the unmistakable, felt-like sheen of young love, integrating an intense and dreamlike kind of naturalism and expressionism, as if the action were festooned in another world. It’s only the macho realism embedded by Hemingway that keeps it from floating away, but A Farewell to Arms is truly and ineffably Borzage’s film: a romantic melodrama at its most rapturous and sublime.

You could win a Dual Format copy of A Farewell to Arms with our latest competition. Follow this link to enter.