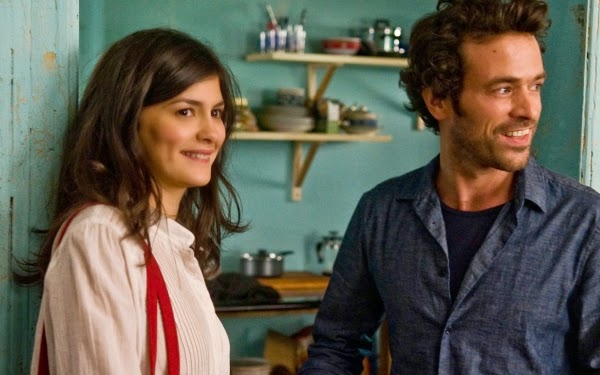 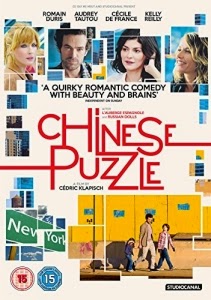 Like a distant Gallic relative to Richard Linklater’s Before trilogy – though worlds apart in terms of style and tone – it’s been over a decade since Cédric Klapisch first introduced a multinational group of friends sharing an Barcelona apartment in Pot Luck (2002). Three years later, they were brought back together for a wedding in Russian Dolls (2005) and now a third outing in the form of Chinese Puzzle (2013). Combining the director’s free-wheeling style and the series’ protagonist’s ‘complicated’ life, this is a warm, funny and inventive addition to the likable French series. Romain Duris returns as genial lead, Xavier, a writer in need of inspiration and finding it through the tumultuous twists his once tranquil life begins to take.

After marrying and having two adorable children with series regular Wendy (Kelly Reilly), amour has cooled somewhat. Emotions are thrown asunder when Xavier decides to help best friend Isabelle (Cécile De France) have a baby with her girlfriend Ju (Sandrine Holt). Soon enough, Wendy has met someone else, moved to New York with the kids, and Xavier has emigrated too. Sham marriages, affairs and the return of Martine (star Audrey Tautou) all ensue in the cultural melting pot of Chinatown, whilst a struggling Xavier attempts to write his book. The success or failure of Chinese Puzzle all rests on the shoulders of Xavier and fortunately, Duris is more than capable of taking the weight. His easy charm combines fruitfully with comical flights of fancy and Klapisch’s lively direction to avoid ever veering into banality.

It does, of course, help that all of the supporting players also have fully fleshed out characters with eleven years of history, but it’s Xavier’s show and he leads the line admirably. Admittedly, there are one or two pieces of the puzzle that don’t quite seem to fit together as slickly as the rest of the production; one such example being Isabelle’s fling with the French au pair. The niggles are few and far between, though, and can be easily overlooked in favour of the romantic entanglements and uniformly endearing performances. Duris, Tautou, De France and Reilly are all having fun stepping back into these familiar roles and they take their audience with them. Chinese Puzzle feels as though it is probably the final act in these characters’ stories and if so, it makes for a satisfying conclusion. It may not be doing anything especially new, but, like its subjects, it’s good company for a couple of hours.

This review of Chinese Puzzle was originally published on 13 October 2013 as part of our London Film Festival coverage.