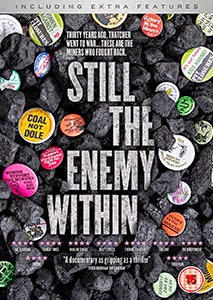 The miners’ strike of 1984-5 was a pivotal moment in the social and political history of the UK, and one which, 30 years on, we are just beginning to properly put into any sort of context. The landscape of the country, both cultural and literal, has changed to such a degree that the Britain we see in Owen Gower’s Still the Enemy Within (2014) is barely recognisable, somehow further removed than either of the world wars. It’s a representation of a path not taken – one of state ownership, care and intervention – as much as it is a historical record. Knitted together from extensively researched archive footage, contemporary interviews and luminous black and white photography, it unfolds with unhurried ease and vitality.

At times – especially when documenting the awful, almost medieval violence of Orgreave in a series of photographs so brutal they approach a kind of surrealism – first-time director Gower catalogues history with startling assurance and grace. The events beginning in March 1984 have always appeared as totemic of the Thatcher government; of the move away from any kind of manufacturing in Britain towards a full embrace of the ‘me, me, me’ culture of capitalism. What they haven’t really felt, until now very recently, is personal – but first and foremost that’s what the miners’ strike was. 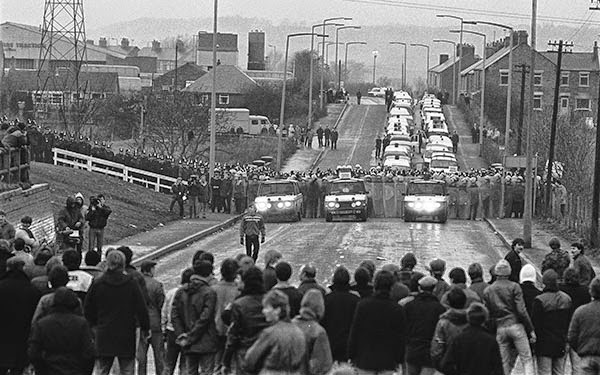 Whilst the strike provided a backdrop for both Billy Elliot (2000) and Brassed Off (1996), this year’s Pride – the inspiration for which is relayed in warm nostalgic tones here – was the first mainstream movie in which it is central to the narrative. A recent tour of National Theatre Scotland’s brutally compelling strike drama In Time O’ Strife, coupled with a slew of print articles offering fresh perspectives and historical exposition, seem to have made 2014 the year that Britain finally tried to analyse and understand the miners’ strike. We do, as a nation, like a good anniversary. In this context, Gower’s film is as vitally important as it is illuminating. The tears and highly-strung emotions of the protagonists are real, as are the stories of desperation and despair that they inhabit.

As Steve Hamil, one of the ex-miners who act as guides throughout, so eloquently puts it, “Human beings get tired, but organisations do not.” These are the lives of ordinary people and communities, swallowed and spat out by a political machine. The miners’ cause united pockets of Britain in a way unimaginable now – working men, women, students, artists and punks come together on the streets, campaigning for change. Gower cleverly contrasts this spirit with the loneliness of the financial crash of 2008, always the logical endpoint of the rise of privatisation and death of industry and community, a path mapped out in 1984 by Margaret Thatcher. The strike is, of course, intrinsically linked to Thatcher. Rather than becoming a central, demonic figure as one might expect, though, her spectre is left to haunt the edges of this film.

Initially portrayed, as she often is, as something of a villainess – all lavish fur and hobnobbing with the rich and famous – the self-styled iron lady is a cold, inhuman and unyielding presence. She has learnt from her predecessor’s mistakes and keeps her intentions to herself, stockpiling coal to guard against uprising in a way Heath did not.

As balmy summer optimism gives way to cruel winter, so too does the strike begin to unravel – but we already know how this story panned out, and how the battle was lost. Still the Enemy Within is about the human lives at the centre of this seismic moment in history. It is about sacrifice and, above all, solidarity – and Owen Gower’s achievement is a towering one.