The ocean is vast and filled with peril, but it is the foolhardy resilience of men that proves the crux of Joachim Rønning and Espen Sandberg’s cinematic voyage, Kon-Tiki (2012). Norway’s most expensive production to date, it was nominated for last year’s Best Foreign Language Film Oscar and now receives a UK release with both Norwegian and English-language versions available (they were shot concurrently). Charting an explorer’s journey from South America to the South Sea Islands on a tiny raft, it is an admirable and handsome picture that peaks in moments of intricately crafted tension, but which never quite captures the adventurous essence of its subject matter. 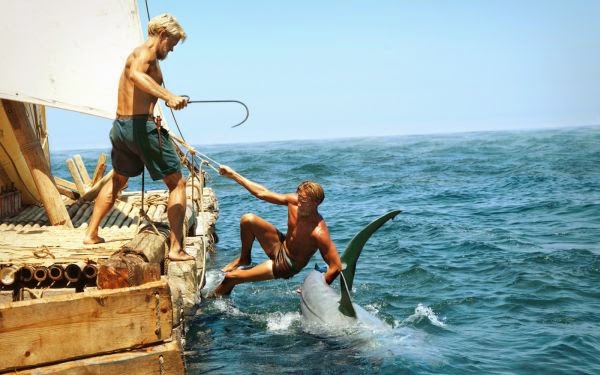 The story behind Kon-Tiki is a true one. Ethnographer Thor Heyerdahl (played with blue-eyed intensity by Pål Sverre Hagen) sets out to convince the academic establishment that Polynesia could have been – and was – settled by intrepid sailors from Peru. It’s a tale of endeavour on the high seas as Thor and his motley crew attempt to traverse the tempestuous Pacific on a vessel held together with rope, just as they hypothesised had been done hundreds of years earlier. The grand traditions of large scale drama are where Rønning and Sandberg are pitching with this and they certainly achieve that end evoking the sweep of old-fashioned epics. As the raft bobbles across the ocean, friendship and camaraderie are both tested while further danger lurks beneath the surface.

“At least I won’t lose my leg to frostbite,” says one blood-soaked crewmate as he skirts perilously along the raft above shark-infested waters, referring to a famed explorer who found himself unipedal after an Arctic expedition. The bravura and hubris of such men in the early 20th century is the ultimate threat here, as Thor becomes consumed with completing their mission at all costs. There are several run-ins with finned predators as well as hazardous moments when leviathans swim beneath the boat straining their rudimentary construction. The intensity of such sequences is when Kon-Tiki really soars, particularly when a man is thrown overboard amongst sharks, or in the filmmakers stunning portrayal of a climactic surfing maneuver that sends the pulse racing.
These moments are far from constant though, and much of the film is given over to this fairly one-dimensional troupe as they drift beneath the baking heat, whilst the will that drives them is presented as unwavering optimism rather than reckless obsession. The scope is restricted almost entirely to Thor with his shipmates, fellow academics and even his wife of little to no consequence. While he is far from uninteresting, a film can only contain so many thousand yard stares across the sea without conveying what is behind them. In only ever managing to skim the surface, the spirit of their crusade is never really evoked. What’s left is ultimately a handsome, and at times heart-stopping voyage that never lives up to its classic forebears.
Ben Nicholson | @BRNicholson
Facebook
Twitter
Pinterest
LinkedIn