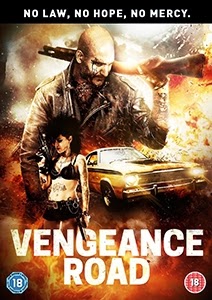 Quentin Tarantino and Robert Rodriquez have a lot to answer for. Seven years after failing to replicate the sleazy low-budget thrills of the grindhouse era, there have been numerous attempts in their wake to achieve the same thing, the majority of which have also stumbled badly. Into that mix comes Vengeance Road (2014), yet another subpar wannabe which again seems to think that substituting in-camera effects with horribly ineffective CG blood-letting is entirely acceptable. Released in the US under the infinitely better if ridiculously lofty title ‘American Muscle’, it’s a cheap and nasty film, minus anything much in the way of fun. 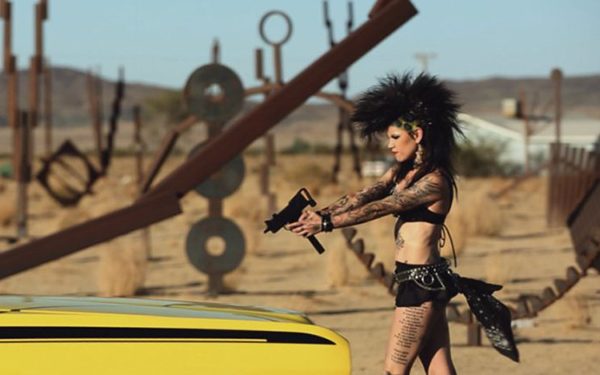 In a vaguely defined post-apocalyptic setting, a hefty, tattoo-covered inmate named John Falcon is released from a decade-long stint in the penitentiary with two objectives. Firstly, to seek revenge against his traitorous brother who was responsible for his imprisonment, after leaving him for dead during a botched robbery. Secondly, he’s desperate to reunite with his estranged wife who has fallen in with his brother’s drug-addled crowd of hellraisers. Running a mercifully short 75 minutes, director Ravi Dhar spends all that time wheeling out the same, tired action beats and adversaries being dispatched without displaying the smallest hint of imagination. He thinks by resorting to using floaty, soft focus flashback inserts throughout of Falcon and his lady this will add weight and meaning to proceedings.

More often than not, they look like filler to compensate for whenever the narrative flags (which is regularly). Like many big-screen men of action who have come before him, lead actor/stuntman Nick Principe seems to believe that whatever he lacks in the acting department, he makes up for in stature. In fact, by sporting a noticeable paunch and coming across like a lumbering mumblecore Hulk Hogan, he proves that he simply hasn’t got what it takes to be a commanding screen presence. The film ends up being notable only for the intriguing found locations which give it a flicker of character, and the blink-and-miss-it appearance of long-time AWOL, and former Greg Araki player, James Duval. The production clearly didn’t have much in the way of money, and while a shout out must go to the art department for fitting the villain’s henchmen with sprayed black toy Iron Man (2008) movie masks, scant trace of imagination or originality has come out of those budgetary shortcomings.