In 1998, Walter Salles brought Central Station (1998) to the Berlinale and came home with the Golden Bear. It was here that Salles met Jia Zhangke, a then relatively unknown Chinese director premièring his debut film Xiao Wu (1997). Salles, like many others, was enthralled by Jia’s singular style and unique brand of social realism. As the cultural landscape has morphed and buckled under the weight of globalisation, films such as The World (2004), Still Life (2006) and most recently A Touch of Sin (2013) have increasingly become one of the few ways to witness the real China. Now, Salles returns to the Berlinale this year to premiere his tribute to the critically revered sixth generation director. 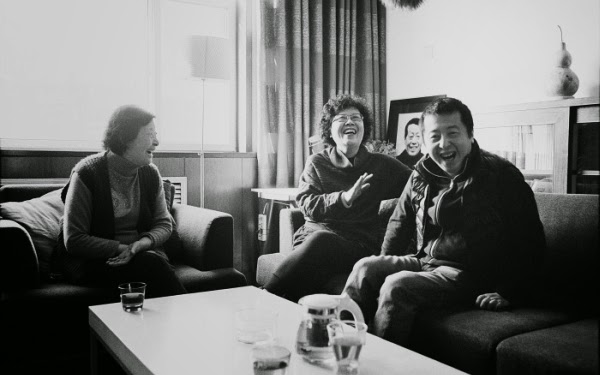 Jia Zhangke, a Guy from Fenyang (2015) is a moving documentary exploring just why Jia’s tales of ordinary Chinese people resonate so powerfully across the globe. A rich and often moving tribute, the film reveals just as much about its subject as it does his fine catalogue of work. At the onset of Salles’ journalistic trip to Fenyang, whilst accompanying Jia and Xiao Wu star Hongwei Wang down a busy high street, an old friend of Jia’s fathers accosts them and asks for a photograph. Jia cordially agrees, although not before correcting their positioning to allow for the best lighting. Charming moments like this litter the doc, highlighting the director’s affable yet workman-like personality. Salles shows a restrained hand, keeping his distance and allowing Jia to take control of his surroundings.

Set around a trip to Jia’s hometown in the province of Shanxi, A Guy from Fenyang blends a series of interviews and clips of his work to make this hazy trip down memory lane an insightful and revelatory experience. Alongside Dr. Wang Hongwei, Jia is joined by a series of collaborators, and fans of his work won’t be surprised to see Jia’s wife and muse Zhao Tao and his cousin Sanming feature to offer their own opinions on the importance of Jia’s work. Additional insights from cinematographer Yu Lik-wai and sound engineer Zhang Yang provide another window into the creative process behind Jia’s distinctive aesthetics. Yet the film is most compelling when Jia is left to converse passionately about his life, be it on stage giving a lecture at the Beijing Academy for Arts or in the cramped bedroom he once shared with his family. One highlight of these edifying chats is Jia’s confession regarding the traits he leaves in his work.

Dotted throughout his films like small pieces of himself hidden within a much larger tapestry of China’s wider social conditions this delicately calibrated duality of the private and public is just one of the elements that makes his work so profoundly moving. During a conversation on a train about state censorship Jia discusses how his hometown trilogy never got released in China, before embarking on a lighthearted tale about the time he was propositioned on the street with a pirated version of his 2000 movie Platform. He describes the moment as feeling like finding a lost child – his earnestness highlighting just how important it is to him that his films to be seen by the very people they’re made for. Our final moments with Jia sees him open-up about his relationship with his father and, in the process, revealing the difficulties of growing up during the Cultural Revolution. Not that we should need one by this point, but it’s moments like these that remind us just how important a director Jia Zhangke really is.