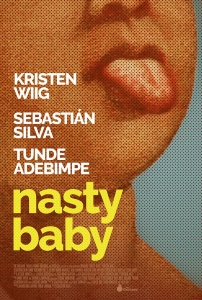 An innocuous US comedy that unsuspectingly morphs into a twisted noir, Sebastián Silva’s Nasty Baby (2015) is a socially conscious thriller that confronts the ignorance of a bohemian culture that refuses to accept responsibility for the societal conditions it’s created. Starring alongside Tunde Adebimpe and Kristen Wiig, Silva has crafted a brutal satire that asks as many questions of the audience as it does of its characters. Set in Brooklyn during a hazy summer, visual artist Freddy (Silva) and his partner Mo (Adebimpe) have decided to have a baby with Polly (Wiig). Despite some apprehensions the trio are unified in the belief that nurture trumps nature and all a baby requires is the shared love of its parents. 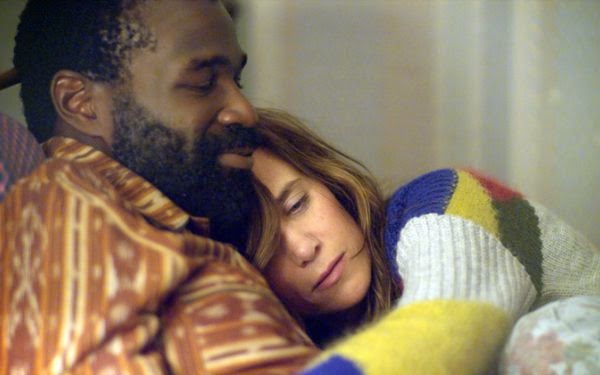 These moments of fleeting sentimentality are playfully intertwined with jokes about Jennifer Aniston’s beige complexion and how Polly’s aggressive hormones have turned her into a ‘semen vampire’. Meanwhile, Freddy’s desire to be a father has permeated into his work and he surrounds himself with photographs of his childhood whilst attempting to create a self-deprecating video installation where he mimics the actions of a baby. However, the serenity of the trio’s New York idyll is destroyed when Bishop (Reg E. Carthy), a mentally handicapped local, begins tormenting them by using a leaf blower in the early hours of the morning. Things escalate one evening when Bishop’s fascination with Polly goes a step too far and what started as a minor scuffle between neighbours quickly escalates.

Nasty Baby is awash with conflict, be it Freddy’s low sperm count, Mo’s reluctance to become a father or the prejudices faced by a multi-racial couple trying to have a baby. However, all of these pale in significance as the film quietly mutates in a revealing portrait of the self-absorbed, individualistic lifestyle of New York’s ever-widening ‘creative’ community. Each character is beautifully formed, with Silva’s penchant for casting comedy performer such as Wiig (exceptional here) and mold them into his own worldview culminating in instantly likeable protagonists. Silva’s style is loose and playful, teasing you with lighthearted games whilst all the time the narrative is unknowingly embedding itself within the darkest recesses of your mind and feeding upon your subconscious prejudices. Just as you start to feel like Nasty Baby is simply another cutesy Sundance indie, Silva takes the story down a bleak and somewhat unexpected path when Bishop’s role as the nuisance neighbour adopts far greater significance.

Basking in the warmth of privilege and entitlement, Bishop feels like a beacon of the archaic discrimination the trio will need to overcome if they’re to start a family together, yet this is far from the case. As a black, mentally handicapped man of advancing years, he represents multiple divisions of those marginalised and displaced by the sprawl of urban gentrification. Silva’s sharp twist (whilst totally aware of the irony at the heart of its all) leaves the audience perplexed and unsure about how to feel. We love these characters and want them to succeed, and whilst we can understand how they find themselves in such a precarious situation we cannot condone their actions. It posits far bigger questions than whether a gay couple can bring up a baby, leading to intense self-analysis and a realignment of your own moral compass. It’s this deft trickery and misdirection that makes Nasty Baby such a sinister treat.