Time has been favourable to The Philadelphia Story (1940). Even as a septuagenarian, it still sizzles and simmers in fine form. Dubbed a “comedy of remarriage”, it is now being played in all its rom-com glory at the British Film Institute as part of a season focusing on the films of Katharine Hepburn. This film in particular has become a pillar of the romantic comedy genre, the film by which most others of it kind are measured – and it reignited Hepburn’s career after a string of financial flops. Having acquired the rights to the story, she was able to guide the production per her wishes and, in doing so, position herself for a winning comeback at the box office. 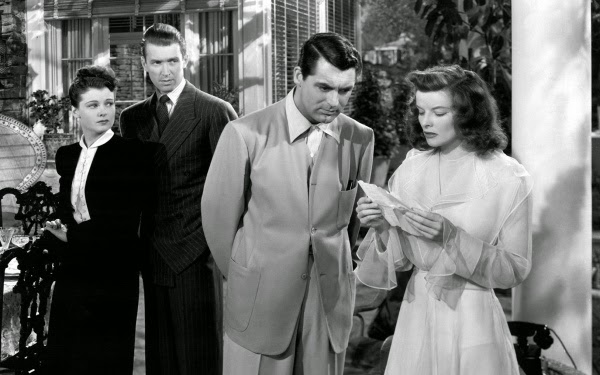 Perhaps most importantly it’s an enduring, whip-smart yarn about the beguiling power of woman over man. A year after her divorce from C.K. Dexter Haven (Cary Grant), Philadelphia society maven Tracy Lord (Katharine Hepburn) is getting married again to business magnate George Kittredge (John Howard). At the behest of his boss (but much against his will), tabloid report-cum-novelist Macaulay ‘Mike’ Connor (James Stewart) has been assigned to infiltrate the nuptials on the sly and get the best scoop possible. He finds himself teamed with Haven and the pair – along with Connor’s colleague Elizabeth (Ruth Hessey) – infiltrate the Lord homestead and proceed to shake up the proceedings in an amorously rabble-rousing fashion. At the center of all of this is Hepburn.

Owing to the fact that her legend has grown considerably in these past 75 years, she seems to dominate the screen. Naturally, Grant and Stewart – equal legends in their own rights – are able to hold their own but this is undoubtedly Hepburn’s film. With a crackling script written by Donald Ogden Stewart, Hepburn swells, framed in the center of nearly every shot she appears in. Clad in trousers and fitted jackets, her hair loose and her face clean, she brings her real-life tomboy persona to Tracy Lord; she is modernity personified. There’s gravity of emotion and brevity of wit in everything she does onscreen, whether its verbally sparring poolside with Haven or warbling Somewhere Over the Rainbow in the arms of Mike in the middle of the night.

What is equally refreshing here is that, within the narrative, Tracy is forced to reckon with her own image, to evolve into a less haughty, more earthly woman. If she can achieve this, she can allow herself to be open to a messier, more instinctual kind of love. This grounds the story in essential human truth – it’s one of the reasons The Philadelphia Story remains so accessible. Tracy commands as a woman of vulnerability, of independence and of resolve. The character that Hepburn shaped onscreen has become the prototype of leading ladies in romantic comedies. Hepburn has delivered to us not only a female character of merit in memory, but also a film worth honoring and celebrating as long as films may live.