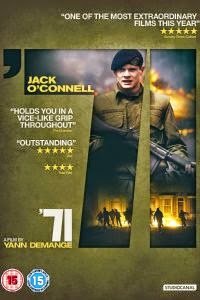 There is this self-destructive fragility to the characters played by Jack O’Connell – his barbarism is measured out by his infantile anxiety. His onscreen personas epitomise society’s inability to effectively govern the disaffected. Last year, he got the chance to burrow deeper into this thematic territory in David Mackenzie’s prickly prison drama Starred Up (2014). Here, he played an institutionalised hooligan shackled by the crooked injustices of authority. O’Connell uses his physicality like a wolf in a birdcage; strong enough to maim but surrounded behind bars. Now, he once again finds himself imprisoned in a pitiless hell in Yann Demange’s ’71 (2014).

One of the strongest directorial debuts in years, it’s a persistently rigid take on The Troubles in Northern Island with O’Connell playing Gary Hook, a young private with the desire to see international combat. Instead, Hook’s regiment is deployed to Belfast during the height of its ethno-nationalist conflict. The platoon’s fundamental objective is to maintain the peace, assisting civilian authorities in their duties. During a house-to-house search, a confrontation triggers a riot and Hook is left behind by his retreating unit; powerless against the republican paramilitaries. He finds himself trapped in a no-man’s-land where both friend and foe are few and far between. Back at the makeshift barracks, Hook’s commanding officer, Lt Armitage (Sam Reid), finds himself in a moral dispute.

It’s with plain clothed intelligence operatives Captain Browning (Sean Harris), Haggerty (Martin McCann) and Sean (Barry Keoghan), each played with opposing tinges of good and evil. The dichotomy of allegiances is where ’71‘s great force prevails where a night in an area on the cusp of an all-out proxy war could leave Hook abandoned by his country and left for the radicalised loyalists to seek and destroy. What Demange and Gregory Burke’s screenplay achieve is not purely a sluggish political rehash of Northern Island’s historic struggles. In fact, the history merely plays as a framework for Hook’s physical and mental entrapment in an environment set to crumble.

It’s not so much Bloody Sunday (2002) or In The Name of Our Father (1993) as it is a straightforward crime thriller. It eloquently sidesteps the Ken Loach-esque moral debate, opting to portray the inner-psychological battle of survival, similarly tuned with Carpenter’s Assault on Precinct 13 (1976) or Ted Kotchett’s First Blood (1982) sans all the pigeon chested pan-action parodying. However, by turning the camera towards a young British soldier lost in the annals of Belfast’s Victorian terraces, ’71 rather brilliantly lobs a political petrol bomb into the ether where none of us are ever fully aware of where it may land. The narrative turns and corners are ever-winding where redemption seems only one terrorist ambush away.