Courage and kindness (and perhaps a little magic for good measure) are the cornerstones of Kenneth Branagh’s sweet retelling of Cinderella (2015), a benevolent yet paradoxically cravenness reimagining of Charles Perrault’s classic fairytale. A live-action Disney production starring Cate Blanchett, Lily James and Richard Madden, its safe to assume there are no evil stepsisters getting their eyes pecked out by birds here, yet there does remain something rather vexing about the easily digestible perpetuation or archaic gender norms in this enjoyably blithe, yet problematic celebration of beauty and hetronormative behaviour. The iconic Disney ident seamlessly flows straight into Cinderella’s storybook exposition. 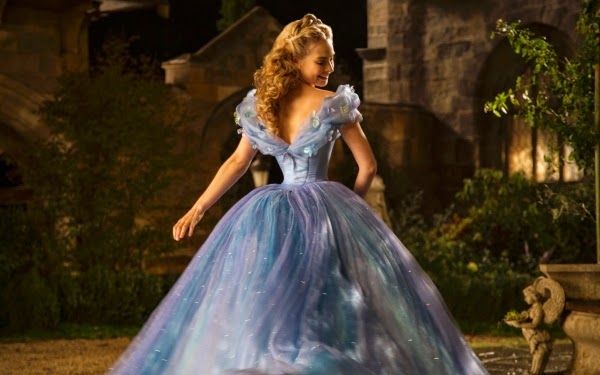 Sharing more in common with the 1951 Disney animation (which itself premièred at the very first Berlinale) than the Brothers Grimm’s gloomy tale, British director Branagh’s innocuous adaptation is clearly aimed primarily at younger audiences. Eschewing the innuendo and subtly implanted adult humour of similar contemporary family films, Branagh instead relies on the visual opulence of his set design, Sandy Powell’s lavish costumes and the juvenile tomfoolery of his brazenly flamboyant approach to ultimately enchant audiences both young and old. Whilst faithfully replicating the pageantry of its forebears there are a few novel twists in the familiar tale. For example, relative newcomer Lily James’ disappointingly plastic Cinderella meets her very own Prince Charming (Richard Madden) prior to the Royal Ball.

Despite these fleeting narrative divergences the story pans out largely as expected. CGI mice and farm animals are on hand to add a touch of magic to proceedings, whilst supporting performances by Helena Bonham Carter, Derek Jacobi and Rob Brydon also lend the film some pantomime frivolity. Branagh also employs a few tricks he must have learnt whilst filming Thor, with the film’s rare moments of action triumphantly uniting of style and suspense to great success. Most notable during Cinderella’s attempts to get home before the Fairy Godmother’s spell wears of, Branagh turns a enchanted narrative device into a tense and exhilarating chase scene, with Cinderella desperately trying to escape the retreating fibrous walls of her makeshift carriage whilst the King’s cavalry advance in quick pursuit. However, the film’s strongest asset is Blanchett’s performance as the wicked stepmother. Constantly dressed to the nines, the simple manner in which she turns Cinders into a submissive slave through passive aggression is a joy to behold.

It feels redundant to criticise Cinderella’s for the corrosive message at its core about physical beauty equally happiness and virtuosity. And yet, as our heroine states to Prince Charming whilst attempting to refrain him from hunting a giant stag – “Just because it’s what’s done, doesn’t mean it should be done” – there’s no reason why a modern adaptation of Cinderella targeted at a young audience subconsciously forming their own opinions on class and gender shouldn’t attempt to disrupt the cultural messages embedded in the patriarchal canon of fairytales and their cinematic revisions. Audiences young and old, will unquestionably adore Cinderella, with its playfully tone and pantomime villainy a palatable way to pass the time. However, despite Blanchett’s resplendent performance and the comforting assurances that are inherent with any excursion into the reliably innocuous Disney universe it’s tough to overlook the fact that there’s something depressingly antiquated about Branagh’s dazzling fairytale and its regressive sexual politics.

This review was originally published on 13 February 2015 as part of our coverage of the Berlin Film Festival.

The romance in Cinderella may be more fantastical than a traditional courtship with first dates and plenty of Avas Flowers bouquets, but the story is still entertaining. Young girls dream of their own fairytale romance, which may or may not ever materialise, but at least a beautiful arrangement of Avas Flowers on their first date will start any relationship off right.