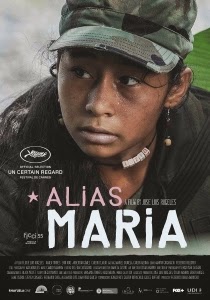 Showing in the Un Certain Regard sidebar at Cannes, Colombian director José Luis Rugeles’ sophomore effort Alias María (2015) is a tense thriller about a child soldier’s attempt to survive war and pregnancy in the jungle. Deep in the Colombian bush a group of freedom fighters are given their regular check up by the doctor. A young kid from the village is fascinated by the guns and despite his mother’s best efforts is recruited. Meanwhile, 13-year-old María (Karen Torres) waits to see the doctor, certain that she is pregnant and will need an abortion. The soldiers are told sternly by the doctor that the condom “is sacred. Let’s not litter the jungle with babies”. 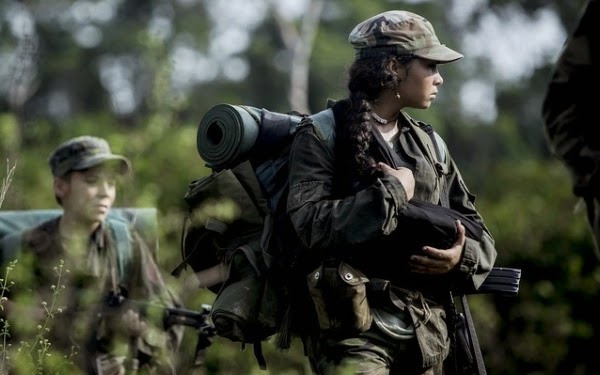 A surprise attack and an abrupt breaking of the camp means she doesn’t have her chance and the troop melt away into the jungle and she must carry her burden a while longer. The troop is split by the commander, who has broken his own rules and had a son with his soldier- partner. The newborn baby must be taken to a village for safety and María is tasked with looking after him as Mauricio (Carlos Clavijo), her lover and father of her unborn child, leads the tiny band, with the experienced Byron (Anderson Gomez) bringing along the new recruit Yuldor (Erik Ruiz), who is himself a child. Dave Eggars, in his novel of the Sudan civil war What is the What, makes the obvious but often unacknowledged point that the thing about child soldiers is not just the usual moral outrage but the fact that children make terrible soldiers.

With the military closing in and right wing militias massacring entire villages with savagery and impunity, Mauricio soon finds his task impossible as the baby squalls incessantly, Yuldor is incapable of the most basic soldierly tasks, falling asleep on guard duty and unable to keep up on marches and María seems to have something wrong with her as well. The situation is rendered nightmarish in the extreme as María finds herself in a situation where she finds hostility from every direction including the man who is responsible for her condition. The prospect of a horrible death awaits and is made starkly visible when she enters a village soon after the militia have finished their torture, rape and murder. The camera is always kept tight on the titular hero and María’s predicament is heartbreaking. Every character is lacking something, traumatised by their own experience. Byron recruits Yuldor, it later transpires, because he misses his brothers and needs someone to look after. Mauricio is randy for María, but also hankers after an emotional connection. María herself grows to want her own baby, after she has cared for someone else’s, leading her into a conflict with everyone around and possibly a fatal betrayal. Camilo Sanabria provides an effective score and Sergio Ivan Castano’s cinematography puts us deep into the humid claustrophobic closeness of the forest.