Chess has always leant itself kindly to cinema, affording both wider allegorical application and pleasing visual opportunities. Four Corners (2013) is the second film to arrive on British shores this year juxtaposing the ease with which a chess-whizz can navigate those sixty-four squares and the hardships endured away from the board. The previous entry into this particular sub-genre was The Dark Horse (2014) in which Maori mythology and masculinity was synonymous with the intricacies of the game. The knight is a key player again in Four Corners, this time associated with the soldiers in a long and bloody war in a gang-dominated Cape Town. 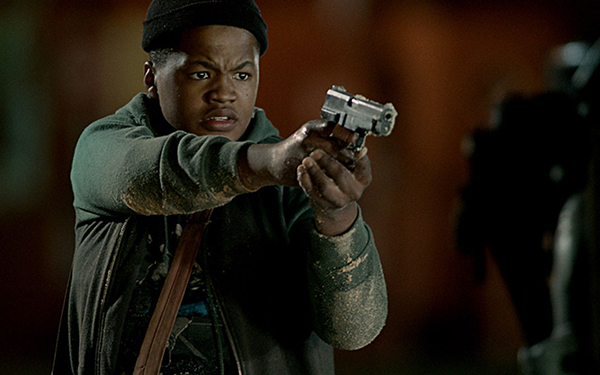 This struggle has lasted for a hundred years according to an opening title card, and pertains to the two Numbers gangs – the 26s and the 28s. Turf lines are emphatically drawn both on the streets and in prison, which is where the action begins. The title – rather than describing the home squares of the rooks – is a slang term for the limits of a cell; literal and physical in prison, figurative and social outside it. There is no escaping this feud it would seem. “If I don’t have a flag,” says one character in reference to the emblematic tattoos worn by all, “the streets will swallow me whole.” Their tattoos act both as tribal war markings and like cave paintings, telling the tale of their past glories.

This is why the decision by 28 general Farakhan (Brendon Daniels), to sear off his own flag is a bold gambit. Released from prison, he settles a personal score with a 26 and then controversially declares himself and his reclaimed home neutral. Meanwhile the playground mimics the prison yard and thirteen-year-old chess player Ricardo (Jezzriel Skei) struggles to resist the pressure from peers and elders to commit to the fight, which in turn threatens to nix his dream of competing in the local youth championships. These are just two of the intertwining narratives that director Ian Gabriel and his co-screenwriter Hofmeyr Scholtz never quite manage to balance. The visuals are handled well; Vicci Turpin’s camera lends events an immediacy that complements the generally naturalistic aesthetic. All of the performances also build on this, particularly Daniels and Skei in the leading roles.

Sadly, though, their sterling work is clouded by the subplots kicking up sand amidst the overarching story. There are scenarios involving a young woman (Lindiwe Matshikiza) returning from her new life in London to pack up her deceased father’s belongings, and one following the investigation into a serial killer abducting local children. Both undoubtedly address relevant issues in the make-up of modern Cape Town, but they also detract from, rather than enrich, the milieu. Revelations thus never pack the punch they should and the endgame lacks the electricity that the performances might have generated. There are definitely striking moments – even in the narrative strands that could have been excised – but ultimately too many pieces on the board undermine Four Corners‘ ambitious game plan.