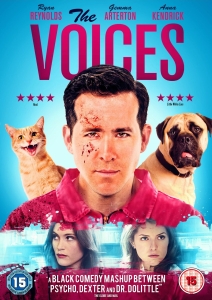 Ryan Reynolds deserves at least some credit for the patchwork of roles he’s picked recently. There’s the countless rom-coms, his superhero duds, acting work with Atom Egoyan and Rodrigo Cortés, but there are also curiosities like The Voices (2014). A jet-black horror comedy featuring severed heads in fridges and a gamut of talking animals (diversely voiced by Reynolds), it might not hang together entirely, but this latest is something of a macabre treat. Reynolds is Jerry, an awkward, mentally unstable packaging worker with more than a hint of Norman Bates. Emerging from an institutionalised absence, he re-enters the fray thanks to a crush on Gemma Arterton’s accounts girl Fiona. 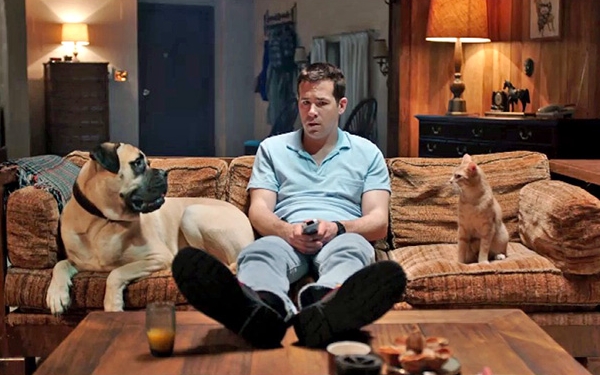 However, a disastrous date ends with Fiona’s unflatteringly bloody end, her head becoming a permanent ornament to his coffee table – a twist that might work if it weren’t plastered on the DVD cover. As he tries to figure his next move, he starts taking advice from his shoulder-angel talking pets: a “good dog” who offers Jerry a saintly path, and a malevolent, cat who swears in a Scottish accent, unapologetic about killing as if murder is the same as catching mice for dinner. These voices, which are never suggested to be anything other than in Jerry’s head, shouldn’t be taken as a discussion of mental illness but as a deft satire of social norms, adding to a zany, irreverent wit.

Among the many oddities of The Voices is the director here is Iranian-born Marjane Satrapi, whose English language debut here is a million miles from her first film Persepolis (2007), winner of the Jury Prize at Cannes. She gathers the best out of Reynolds, who reveals depths as his character develops, and is far from the vacant canvas that some critics have expressed in wildly divergent reviews of the film. His awkwardness is consciously impish, and Reynolds holds his own when others (such as Arterton) look totally out-of-place. It’s delivered with a Grand Guignol-esque production design in its garish colours that looks halfway between Wes Anderson and Twin Peaks. But horror comedy is a tricky genre to master, and the tone juggles too much in Michael R. Perry’s 2009 blacklist script. While it’s suitably gory, it’s hardly scary, and it lurches from murder to romance, to over-serious flashbacks of Jerry’s oh-so-sad childhood. Perry too, neglects developing his women characters: the three lead women are earmarked as hot (Arterton), kooky (Anna Kendrick) and fat (Ella Smith) in a way that was distasteful. But those characters at least have agency, a character trait that marked an interesting comparison with Jerry, imprisoned by his schizophrenic thoughts. But don’t watch The Voices for thought-provoking commentary, come for the weirdness of this whole escapade in Reynolds’ career.