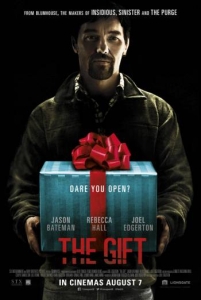 Harking back to the taut psychological thrillers of the late 1980s, where multiplex screens were littered with films calibrated towards adult audiences, Australian actor/director Joel Edgerton’s feature debut, The Gift (2015) is a welcome slice of intelligent entertainment. Produced by Jason Blum’s Blumhouse Company that, for better of worse, has reshaped the multiplex landscape, Edgerton’s tight home-invasion thriller transcends genre, morphing into a chilling drama about the insidious effects of psychological abuse. Working from his own script, Edgerton eschews any form of exposition and introduces us immediately to childless couple Simon (Jason Bateman) and Robyn (Rebecca Hall). 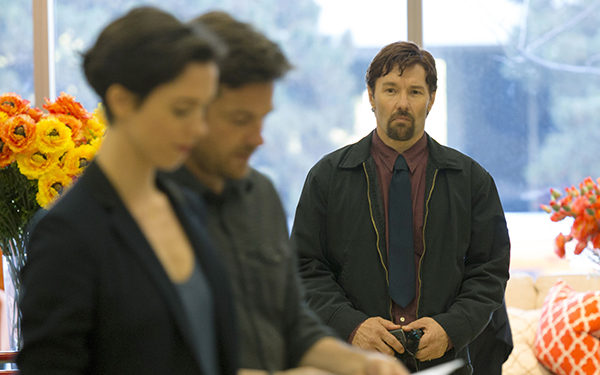 The pair recently moved to Los Angeles for Simon’s new job at a successful security firm, and whilst out shopping for supplies they bump into an old classmate of his named Gordo (Edgerton). Simon struggles to place Gordo’s face, yet a series of unannounced visits (predominantly when Robyn is home alone), and a variety of surprise gifts soon jog Simon’s memory. As the weirdness escalates, and Gordo’s presence becomes increasingly unsettling it becomes clear that Simon and Gordo remain the same people they were at school – one a spiteful bully, the other his victim. From Ryan Gosling to Natalie Portman, there’s a growing tendency for actors to use their directorial debut to exhibit their artistic creativity, often resulting in a wildly self-indulgent and flamboyant mess of influences and desires. Edgerton’s debut is markedly different and it’s refreshing to see an actor who understands the importance of honing your craft.

Knowingly playing with the audience’s familiarity with the genre, Edgerton adroitly employs recognisable tropes such as shock cuts, slow pans and sinister music to ratchet-up the tension. As this taut story unfurls, the audience is led willingly down a well-trodden path of genre clichés whilst all the time blindsided to the film’s true agenda as Edgerton subtly lays the foundations of a far more relatable and disturbing horror. There’s something more complex bubbling below this familiar revenge narrative. Simon and Gordo’s conflict may take centre stage, yet it’s the invisible victimisation of Robyn that turns this rote thriller into something far more relevant. Robyn who, for reasons undisclosed, has decided not to return to work, is constantly viewed through doors of their ostentatious condominium or the misted glass of the shower, which appear like translucent walls of a domestic prison.

The dimension of Robyn’s emotional abuse is cleverly suggested through intelligent framing and Eduard Grau’s chillingly low-key cinematography, incarcerating her within her own home. Bateman and Edgerton’s performances may steal the spotlight but throughout the film Hall traverses an astonishing range of emotions, from joy to complete psychological disintegration, her perspective of events key to understanding the film’s message. In its final twist, The Gift falls back on genre conventions yet leaves the audience plenty to mull over if they wish to look beyond a simple tale of bullying. The Gift might not smash the boundaries of genre filmmaking but therein lies its appeal; a smart, well-made thriller that balances high-minded cinema with genre thrills.