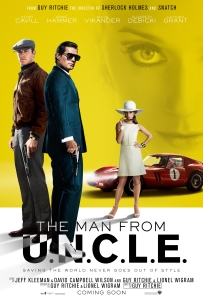 Lock, Stock and Two Smoking Barrels (1998) helmer Guy Ritchie returns to the director’s chair with The Man from U.N.C.L.E., a stylish rework of the famed 1960s TV show starring chap of steel Henry Cavill, Armie Hammer and Alicia Vikander. The effect is a slick action-adventure, lacking pace and plotting, wrapped in beautiful production design and oozing style. We open at Berlin’s Check Point Charlie at the height of the Cold War. Master thief turned secret agent Napoleon Solo (Cavill) has been tasked with bringing in Gaby (Vikander), the daughter of a famed German nuclear scientist. Hot on his heels is the hulking KGB agent Illya Kuryakin (Hammer), who’s also tracking Gaby.

We discover that the agents are going to have to team up in order to defeat the mad schemes of a terrorist group made up of Italian millionaire fascists, lead by the incredibly well-coiffured Victoria (Elizabeth Debicki), who want Gaby’s father to create a nuclear bomb. The plot is surprisingly thin. It shares a great deal in common with Ritchie’s Sherlock Holmes movies, relying on the buddy-movie dynamic, where we are presented with another odd-couple. The stern and temperamental Kuryakin is, in essence, Watson and the suave maverick spy Solo is our Holmes. While the bickering is very reminiscent of Ritchie’s sleuth cycle, the homoerotic tone of the Sherlock/Watson dynamic is abandoned making way for bullish, masculine bravado – a much less interesting relationship dynamic. 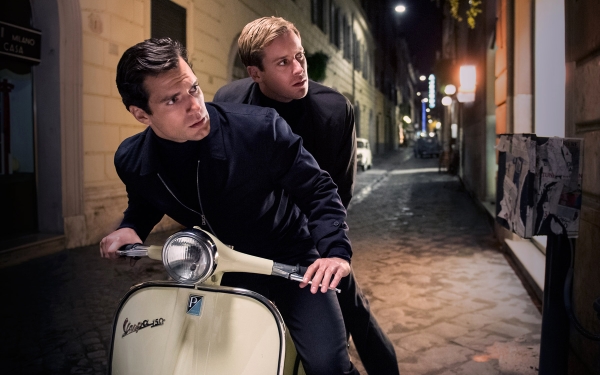 Vikander is reduced for the first act to be little more than a third wheel. At one point, Gaby gets caught in an argument between the two spies as they attempt to dress her like a doll before she emerges decked out in clothing of her choice. That isn’t to say she is reduced to the levels of a Bond girl, she gets her moments to shine and proves to be a feisty foil to the macho chest thumping of the two male leads. Ritchie does demonstrate his ability to craft kinetic action sequences. For the most part, these set-pieces manage to thrill – ranging from a car chase through the backstreets of Berlin to camp heists loaded with squabbling quips from the rivalling alpha males. Yet they’re very by the book, falling away to be replaced by plane-hopping across various European locations, shifting the audience’s gaze to the cut of suits and the seams of dresses rather than plotting.

The contrast between Solo and Kuryakin, so brilliantly captured by Robert Vaughn and David McCallum in the original series, have been heightened to extremes and provide much of the comic tone of the movie. Solo is decked out in the finest three-piece suits, sleeps with a female hotel concierge to exert his masculine prowess, wandering in and out of scenes with glib one-liners putting down his Russian counterpart. Cavill’s character is a nonchalant figure, caring little about the events that unfold around him. Solo’s smooth, cavalier manner is in part a reference to his past as an art thief, only serving his country to avoid jail time. The Man from U.N.C.L.E. undermines any assumed peril, to the point where he feels happy to chow down of a sandwich and a cheeky bottle of red while Kuryakin is dodging bullets. Meanwhile, Hammer’s Kuryakin is shown as rage-fuelled beefcake who looks like he has fallen off a Soviet-era propaganda poster. It’s revealed that Kuryakin’s father was imprisoned in a gulag. This disgrace to his family is shown to be the route cause for his short temper causing him to pummel anyone who looks at him the wrong way.

Kuryakin, unlike Solo, is dedicated to his country and protecting the world. His zeal for doing the right thing, much like Solo’s devil may care attitude, reaches obnoxious levels. Surprisingly, there’s little chemistry between this trio of unlikely heroes and even in the moments where we see the softer side of Kuryakin, as he falls in love with Gaby, it underwhelms. Then there are strange tonal choices that take things in a much darker direction. Gaby’s uncle, Rudi (Sylvester Groth), is a former SS scientist who experimented and tortured Jews during the war. We get a strange and alarming torture scene that detours from the light, camp, comic tone only to return to it at the end of the scene in a shockingly ill-judged tonal shift. It’s a good-looking film and the three leads hold our attention, yet the lacklustre plotting and lack of narrative drive undercut The Man from U.N.C.L.E.’s overall charm.