Having continued his fascination with the secrets and lies that act as an ostensibly dormant undercurrent to everyday life with recent films such as In the House (2012) and Jeune & Jolie (2013) – the latter of which this shares a sexuality-based topic – François Ozon returns with The New Girlfriend (2015), an audacious but somewhat insubstantial drama featuring a French actor as you’ve never seen him before. Based on the short story collection by Ruth Rendell, The New Girlfriend and Other Stories – though given its own ‘Ozonian’ twist – the film sees Anaïs Demoustier playing Claire, a women who, after the death of her best friend, vows to watch over her child and husband David (Romain Duris). 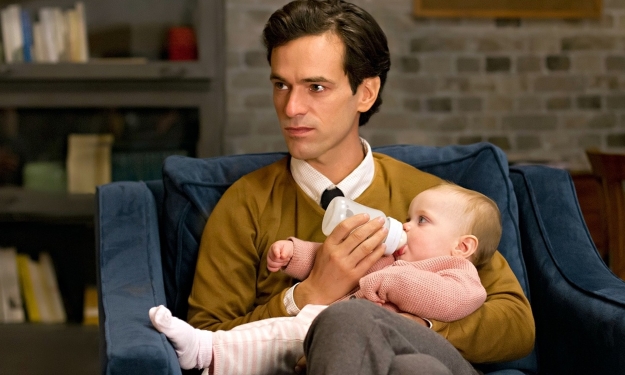 Whilst battling through her distressed state of mind, Claire’s burgeoning relationship with David takes a confusing turn after she makes a startling discovery: in the wake of overwhelming grief, he has reinstated his passion for wearing women’s clothing. Initially donning his late wife’s attire to provide his newborn daughter with the maternal and feminine presence she now lacks, David soon begins both losing himself in his newfound persona – who he soon calls Virginia, and intoxicating Claire in the process, with the two gradually bonding over more than just couture, which puts a strain on her marriage to Gilles (Raphaël Personnaz).

A plot that, say, in the hands of Hitchcock would have made for deliciously macabre melodrama, The New Girlfriend is an interesting curio from a prolific filmmaker who, since the early nineties, has continued to probe societal mores and sexual identity to mostly astute effect. Eradicating the thriller aspects of Rendell’s original story for a more playful approach entrenched in camp, Ozon mounts this complex study of longing and suppressed desire as less an all-out comedy and more a psychosexual dalliance, suppressing most opportunities for milking the material of its easy laughs. As the bereft-cum-liberated David, Duris gives one of his finest performances, fully convincing as both a conflicted men and glamorous woman caught in a straight love affair. It’s with Ozon’s clear desire to dispel the cliché that cross-dressing automatically equates to homosexuality that he begins to stumble over himself, over-egging an already complex plot with musings over gender roles and relationship quandaries that rarely amount to the heft he clearly believes they have. Still, with the recent passing of Rendell still fresh in the memory, what the filmmaker achieves is bringing back to consciousness a unique literary voice whose work deserves further adaptations.