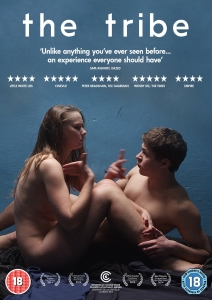 A title card at the beginning of Myroslav Slaboshpytskiy’s incredible debut feature The Tribe (2014) explains that the entire film is in sign language and there will be no voiceover and no subtitles. For that matter, there will be no audible spoken dialogue. We are immersed in the world of the deaf, but we are also, crucially, excluded from it unless you are fluent in Ukrainian Sign Language. There will be no concessions and we must pick up what we can, attentively following the action and attempting to read relationships and intentions, unravel the structure of this microcosmic society. A young man (Grigoriy Fesenko) travels to a Ukrainian boarding school for the deaf in which he is enrolled. 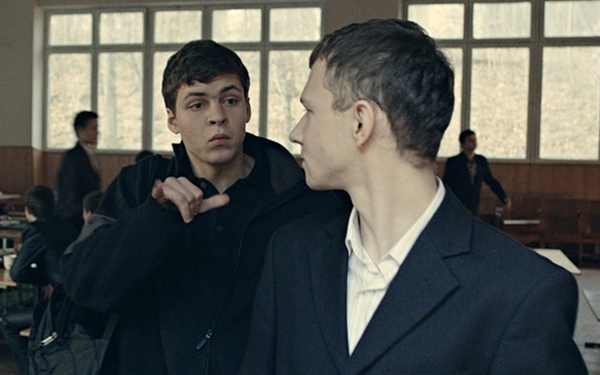 He is welcomed to the school by the headmistress and taken straight to classes, carrying his cumbersome suitcase and with a face expressive only of sullen resignation. Soon enough his classmates begin to take the measure of him. He is casually bullied and ordered about by the other students, having to prove himself via various rough house initiations until he is allowed to enter the eponymous tribe. No slouch at violence when push comes to shove, the youngster is gradually allowed up the pecking order of what is slowly revealed to be a flourishing subculture in thuggish violence and crime. Two of the female students are vanned out to a nearby truck stop every evening where they are pimped out to the sleepy truck drivers. Other younger students go up and down the train carriages alternately begging and stealing as opportunity affords.

Violence isn’t used as a threat but is simply unleashed. Kicking someone unconscious is the work of moment with no one caring about the potentially fatal consequences. The young man’s rise, however, stumbles when he falls in love with one of the truck stop girls (Yana Novikova). Now working as the pimp, he barters a night with her, but the experience touches him deeply. Slaboshpytskiy is typically obtuse in letting us know how mutual the young man and the girl’s feelings might be. The boy seems to have discovered a rare moment of contact with a world beyond himself and the crumbling institutional walls that surround him, but the girl has her own distinct problems – the solution to one of which makes for perhaps the most harrowing scene in a film of several harrowing scenes – and her own ambitions to escape. Reluctant to facilitate the girl’s continued trade, the lad risks the ire of the group and demoted and despairing, soon finds himself on the outside looking in and is increasingly aware of his own dreadful isolation. The formal framing, the long shots and tightly controlled camera movements unveil the secrets of the school with a precise brutalism. Our first sight of the school has been a ceremonial opening, but it soon becomes apparent that far from being a sub-culture of rebellious youth, the violence, thievery and prostitution are not aberrations, but just how far they profit the school is left dangling.

Sergiy Stepanskiy’s brilliant sound design creates a world of footsteps echoing in corridors, snow crunching underfoot and doors slammed that no one hears, and leads to one of the darkest jokes. The deaf community, insofar as they have been served by cinema, have most usually appeared in inspirational films such as Children of a Lesser God (1986), with the usual plea that said group “is deep down just like us”. However, The Tribe obstinately refuses to allow us to enter this world fully. Apart from the credits, we (assuming once more we’re not deaf) don’t know anyone’s names; we are not intimate to their conversations; we don’t join in their jokes, or hear their arguments. On several occasions, the ability to hear what they cannot is accentuated as a turning point in the story and we are aware of a vulnerability, even as the tribe itself reserves its worst brutality for its own members. The Tribe is not just a sociological drama about life in harsh institution – comparable to Scum (1979) or at the other end of the social scale If… (1968) – it’s also a lesson in looking and listening, belonging and not belonging. The worthy recipient of several prizes at Cannes, it’s a fascinating and compelling picture, quite unlike anything else.