Clive Barker’s S&M Gothic fantasia has been poorly served (tainted even) by a string of DTV sequels. The Liverpool-born horror visionary’s Cenobites and Lament Configuration are without a shadow of a doubt among the most compelling creations in all of literature and genre cinema. The Pope of Pain – that’s Pinhead (played by Doug Bradley) – is as iconic as Michael Myers, Jason Voorhees, Freddy Krueger and Leatherface, but he operates very differently. He’s a far classier figure, in fact. 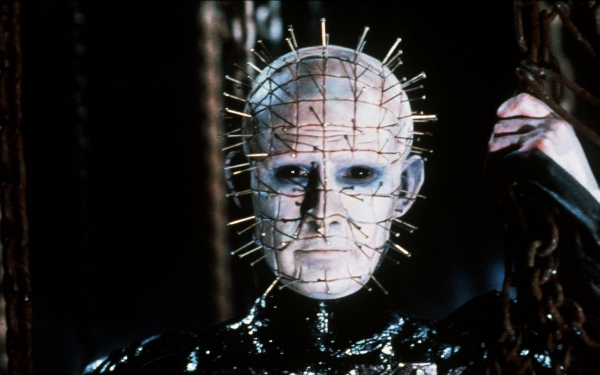 Once we get past the underrated delight that is Hellbound: Hellraiser II (1988), the law of diminishing returns hit strides of terribleness no franchise should ever endure or suffer (Jesus wept, indeed). UK cult specialists Arrow Video’s limited edition Blu-ray box set features Hellraiser (1987), the sequel and Hellraiser III: Hell on Earth (1992) and it is likely to keep fans busy – quite literally – for hours. Along with high definition scrub ups of the films, the bonus material is abundant and, as expected, very thorough.

Also included in The Scarlet Box – a name connecting to the recent Barker novel, The Scarlet Gospels – is the feature-length documentary Leviathan, which explores the first two movies in-depth. There are commentary tracks and a mighty booklet, as well as featurettes, interviews, deleted scenes and trailers. Also found on the fourth disc: Barker’s experimental shorts, Salome and The Forbidden. The latter, was shares some motifs and ideas with the Hellraiser films, was printed in negative, which ingeniously gave it an almost snuff movie feel. If it were a snuff movie directed by Jean Cocteau, that is. The die-hard fans will also be keen to check out the long-lost ‘surgery scene’ from Hellraiser II. It’s one of those pieces of ephemera that grow into a sort of nerd legend. It was recently rediscovered on a VHS-transferred work print of the film, and it can be found on the Hellraiser II extras, but don’t be getting too excited. Kirsty (Ashley Laurence) and Tiffany (Imogen Boorman) meet Pinhead and a cohort as they pose as surgeons in the bowels of the loony bin. Then we see the Cenobites in surgeon’s garbs. With more extra features than you can shake a stick at, The Scarlet Box is worthy of a place in any horror fan’s collection. It’s practically a must-own. Hellraiser and Hellraiser II are two of the best modern-era horror films out there and Hellraiser III can be tolerated because it’s nowhere near as abysmal as others in the series.