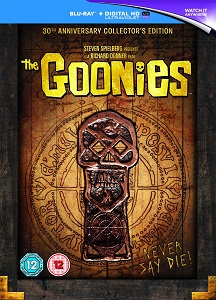 “Goonies never say die”, the now immortal rallying cry by young adventurer Mickey (Sean Astin) to his band of fellow teen treasure hunters can’t help but echo the enduring appeal of this film. Thanks to endless Sunday afternoon television repeats and frequent appearances in pop culture, The Goonies (1985) has become something of a cherished kids classic. While it doesn’t quite reach the heady heights of some of its Amblin stablemates of that era, there’s a rough around the edges, knockabout quality to its undeniable charm. 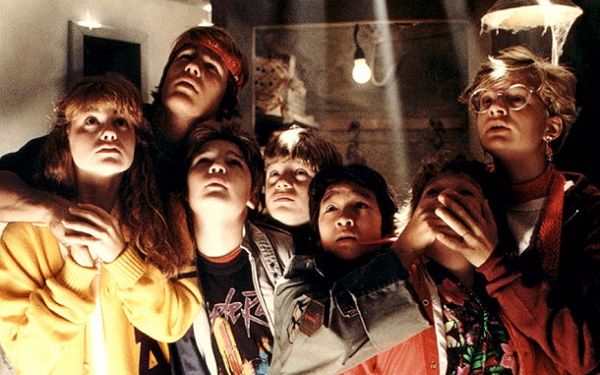 Genre-hopping director Richard Donner never lets proceedings flag, and thirty years later, that fun atmosphere and acutely Spielbergian sense of awe and wonder remains relatively intact. Released during a particularly successful run of Hollywood family-friendly wish fulfilment yarns when teenager were either travelling back in time or being whisked off to the far reaches of the galaxy, the kids here were offered an equally fanciful, albeit earthbound, expedition to search for and unearth buried pirate treasure.

Viewing the film now the obvious Indiana Jones parallels are hard to miss, but there’s an interesting mix of video game narrative, which sees the characters navigate a series of death-defying challenges to reach a further level (this was around the time of the home console boom), coupled with an attempt by scriptwriter and future cinematic Harry Potter skipper Chris Columbus to pilfer from classic literature, fantasy or otherwise. We have the Hardy Boys’ derring-do spirit, combined with the swash-buckling exploits of the legendary Blackbeard (an obvious model for the film’s fictitious scourge of the sea, One Eyed-Willy). There’s even a tragic Quasimodo figure in the guise of Sloth, an initially feared creature who turns out to have a heart of gold despite his formidable appearance. Sloth and his backstory are just one of a number of elements which would be deemed highly inappropriate in the modern overly-PC Hollywood family landscape.

The outrageously risqué humour as Mouth (Cory Feldman) falsely translates English instructions to an unsuspecting Spanish assistant; Chunk (a scene-stealing Jeff Cohen) getting locked in the pantry with a day-old corpse before being subjected to child-kidnapping and near torture. These antics simply wouldn’t make it past first draft now – raising questions as to the veracity of the decade-plus online whisperings of a sequel. Disc-wise, this 30th anniversary edition doesn’t offer any new features, but the supplementary archival material will undoubtedly appeal to devoted fans of the film. A younger contemporary audience schooled in CG superhero destruction porn and slickly-made Pixar offerings may struggle to fall in love or even see what all the fuss is about, but the nostalgic glow cast upon those who grew up on The Goonies still shines brightly.