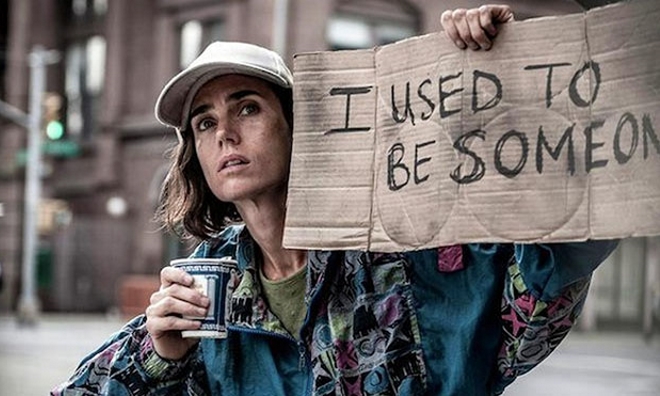 The dedication which closes Paul Bettany’s debut film Shelter (2014) reads “To the couple who lived outside my building”. Expressing both detachment and proximity, it admits to the essential discomfort that characterises Hollywood’s occasional flirtations with vagrancy. From The Fisher King to The Soloist, the homeless are treated with a mixture of whimsy and guilt-ridden fascination. “We’re a moral stop light,” Tom Waits growls in Terry Gilliam’s Arthurian fantasy. Weighed down by a similar earnestness, Shelter ultimately gets jammed in its own increasingly over-wrought, well-meant and predictable melodrama.

We first meet Tahir (Anthony Mackie), an illegal Nigerian immigrant and vagrant, as he is released from prison following an arrest for being disorderly. At first the charge seems incredible as Tahir is almost a model citizen. Softly spoken and polite – the arresting officer thinks he’s being sarcastic with his “yes sir” and “thank you, sir”- Tahir begs for money with some busking, drumming on two plastic tubs, scavenging food from bins and dropping by the mosque for some clothes, or kindly spiritual advice from the local Imam. He spies Hannah (Jennifer Connelly in an intense and committed performance) covering the same pitch as he is and one night saves her from a potential suicide attempt. She is a junkie and a mess, but tentatively the two start to look out for each other and an almost domestic relationship begins to form even as they sleep rough.
A brief respite is offered as they fortuitously take over the house of an upper middle class family who are away on holiday. Here the two have a moment to consider their lives, their relationship and even discuss their philosophies of life: she is an atheist, he believes in Allah. At this point the audience also learns who they were. The placard Hannah uses while begging reads ‘I used to be somebody’ and this is part boast, part promise of exposition to come. Cast into the midst of poverty by grief and substance abuse, Hannah is the fish out of water – she can speak French and scrubs up to look like…well, Jennifer Connelly. Not too hard on the eye himself, Tahir manages to high-road Hannah’s confession with one of his own which is even more heart-rending and shows himself to be even more compromised, adding the War on Terror to the already heady mélange of social distress. The problem with these backstories is that they are so nakedly backstories, unveiling the nobility and depth of our characters. Would we have cared less if their lives had been less dramatic, less exotic?
Arriving alongside Richard Gere’s down and out turn in Time Out of Mind, there is always the danger that Hollywood’s slumming begins to resemble the ‘Derelicte’ collection from Zoolander rather than a real attempt to understand and document a social reality. Bettany can’t help his stars looking like stars and could argue that without them the film wouldn’t have got financed, but his characters’ narrative arcs hit their hot buttons too adroitly and the soundtrack dials up and cues each emotional response to each unfortunate twist of fate with a slick readiness. Cinematographer Paula Huidobro creates a spectral New York with an eye for easy symbolism – the star spangled banner spied through a chain link fence – and moments of fleeting beauty: ice on a window, snow drifting. At one point the lovers fall into a puddle and splash into a Malickian underwater love scene. Reminiscent of Ewan MacGregor’s toilet dip in Trainspotting with its glib romantic escapism, it betrays a lack of confidence in the subject matter.