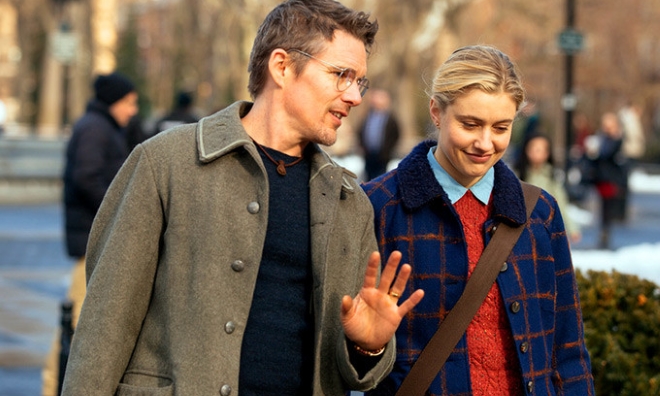 Rebecca Miller’s largely disposable Maggie’s Plan ensnares Greta Gerwig, Ethan Hawke and Julianne Moore in an unconventional love triangle. Gerwig plays the eponymous Maggie, a thirtysomething singleton working as a business developer for the arts and design world. Whilst speaking with her old friend Tony (Bill Hader), whilst walking his child, she complains about her inability to sustain a relationship and her desire to have a baby of her own. However, since she’s incapable of sustaining a relationship for any longer than six months she decides to go down the route of a sperm donation. Her donor: Guy (Travis Fimmel), a self-proclaimed “pickle entrepreneur”.

Just as Guy signs the paperwork Maggie meets John (Hawke), a professor in Fictocritical Anthropology who specialises in commodity fetishism. John is an aspiring novelist and Maggie agrees to read his manuscript, with the pair bonding over their many discussions about his work. Sadly, John is married to the intellectually intimidating Georgette (Moore). Maggie’s enthusiasm for engineering her own fate and the deep seated resentment towards Georgette contained in the subtext of John’s novel bring the two closer together and, after getting locked out of his apartment, John arrives at Maggie’s door at the moment she’s about to inseminate herself to declare his undying love. Audiences have become used to seeing Gerwig play anxious, intelligent New Yorkers, whose fast-talking confidence often acts as a veneer to conceal her character’s overwhelming sense of doubt and Maggie’s Plan is no exception.

Miller’s latest exploration of unconventional characters in challenging relationships is about Maggie’s overwhelming desire to not be a slave to destiny, writing her own fate and having a baby by herself. However, as the film progresses, she begins to realise the life she has manufactured bares little resemblance to what she dreamt it would. This sudden leap from John’s confession of love to the new couple’s married life, complete with a baby girl Lily, presents us with a relationship turned sour, with Maggie frustration at her husband’s egotism running con tray to her notion of love. It’s at this point that it becomes clear the film’s title doesn’t relate to Maggie’s decision to have a child, but an elaborate ploy to get rid her husband. At one point in the film, whilst bathing with her daughter, blowing bubbles and enjoying some peace and quiet, Maggie says without any irony: “I want to live inside a bubble”.

Another Manhattan dramedy with the city’s harsh corners removed, the witty, fast-paced dialogue of Miller’s script is easy to digest, yet it quickly becomes difficult to care about any of the film’s characters. Although this pseudo-intellectual romantic comedy has its moments (primarily the scenes involving the underused comic talents of Hader and Mya Rudolph), its sedate exploration of the complexities of modern romance and the shifting dynamics of the family unit leaves a lot to be desired. There are many humorous one-lines and the script sizzles with witty asides. Yet each encounter is utterly disposable, lacking in any real substance and rendering the Maggie’s Plan as little more than a mildly amusing diversion.