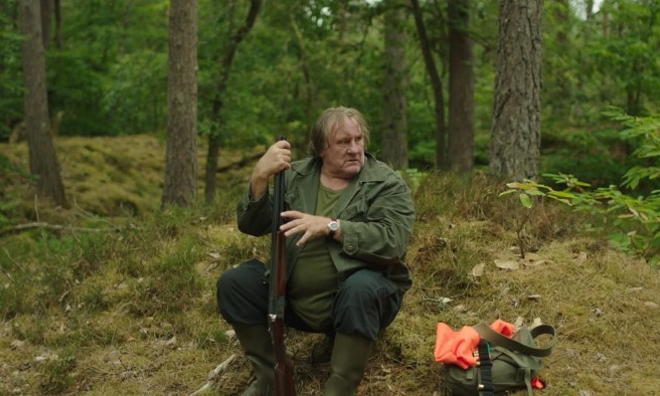 Guillaume Nicloux reunites with Gérard Depardieu – following last year’s Cannes title Valley of Love – for The End, a lean, spiritual voyage into the unknown. Opening with the sound of a dog barking and the ringing of an alarm clock, the first shot of Nicloux’s latest sees Depardieu strewn atop his bed in just his underwear. It’s a revealing opening, but there’s a sense we’re going to learn a lot more about Depardieu than whether he’s a briefs or boxers man. Depardieu plays an unnamed hunter and we join him and his dog as they depart for a nearby forest to snare some rabbits – or perhaps he’s hunting for something far more elusive? His excursion soon progresses from carefree meandering to a palpable sense of placelessness and it doesn’t take long before the hunter’s dog disappears and he finds himself lost.

Before entering the forest, The End’s title card hits the screen. It’s a joke by the film’s notoriously provocative director and one the audience can read in various ways. “If my legs weren’t hurting so much I’d think I was dead,” pontificate the hunter after having already spent one night and two days lost in the woods. It’s as if he’s trying to ensure the viewer is aware that Nicloux is doing something smarter than merely guiding his protagonist through a rural purgatory, yet neither is prepared to expand on the topic any further than that. Poignantly at war with his own demons, with the intensity of self-scrutiny worthy of comparison to Kafka or Dostoyevsky, the Hunter’s tale, just like the few unhelpful people he encounters in the forest, asks far more questions than its willing to answer.

Depardieu is endlessly watchable (as to is Nicloux’s adroit harnessing of natural light and ambient noises to construct a lush flow of image and sound). In his eyes there is something unreadable, something he does not want to be read, the determined blankness that in a predator would conceal hostility, but in prey forms an overwhelming wish to disappear. The End’s lack of exposition means the audience is unsure which the Depardieu is, hunter or game, and its only through the gentle trickle of information received as he traverses endless branches of thoughts that the viewer emerges, as if like the Hunter, confused by a seemingly endless series of dead ends.

Depardieu gives a tender and reflective performance that’s far less manic than some a lot of his more recent work, but its only after a disturbing scene in which he encounters a naked woman sat by his campfire that the man hidden behind the camouflage jacket is revealed. Once his gun, florescent jacket and phone disappear, and he becomes more attuned to his natural surroundings, does this wheezing, constantly sweating hunter finally become an affable protagonist. A frustratingly cryptic curio with a mystic sense of purpose that sadly alludes both the hunter and viewer, this opaque drama about how to remain humane when faced with the most awful, unavoidable truths about ourselves is a mesmerising, if unsatisfying trip you’ll happily want to get lost in.