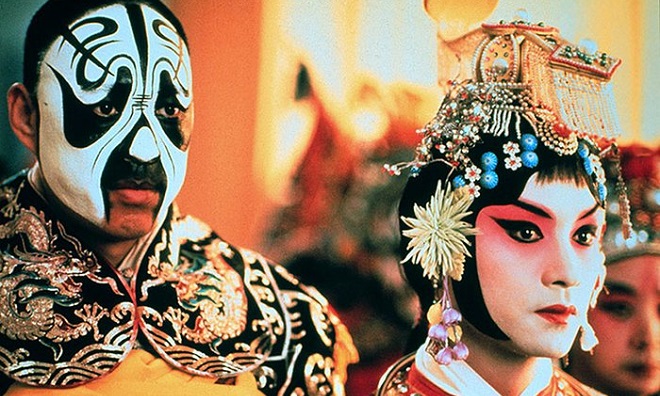 The aspirations of art pitted against the never-ending flux of politics. That is the underlying conflict driving Farewell My Concubine, a tale of two Peking Opera singers struggling to preserve themselves and their trade during the revolutionary turbulence of twentieth century China. We first meet Dieyi as he is abandoned by his prostitute mother at an opera training school, with hopes of a better life for her son. Despite a rough start, Dieyi eventually settles in to the harsh way of life of the academy and – because of his rather feminine appearance – is assigned the role of the concubine in rehearsals of the classic Chinese opera that gives the film its name. Along with stage partner and close friend Xiaolou (Fengyi Zhang), Dieyi (Leslie Cheung) hits the big time, and as adults the two men perform at the famed Peking Opera House. But this bliss is not to last, as Xiaolou is snatched from Dieyi by high-class courtesan Juxian (Gong Li) and a succession of catastrophes – Japanese invasion, civil war, and Communist persecution – tear their lives asunder.

The contrast between the unchanging world of the opera and the political chaos that ensues is placed front and centre by director Chen Kaige. A deterministic atmosphere of ritual and hierarchy characterises the first half of the film, as Xiaolou and Dieyi are beaten and bullied by their teachers into perfecting roles sung identically for centuries. The opera feels hermetically sealed off from the society that surrounds it, its self-referential concern with its own aesthetic standards the only thing keeping it going. That is until reality comes crashing in, the unprecedented power of modern colonial and revolutionary warfare too much for even the Peking Opera to resist. While the Japanese leave the Opera largely untouched, the Communists waste no time imposing their ideological vision upon the company. This enrages Dieyi, who has no time for clumsy tales of proletarian heroism. The new regime interrogates and persecutes as it pleases, humiliating Dieyi, Xiaolou and Juxian with accusations of homosexuality and prostitution. Compared to this kind of authority, the harsh discipline of the opera school feels downright cushy.

Gender ambiguity is another important theme, more so than the homosexuality many commentators take the film to be about. While Dieyi is undoubtedly both effeminate and unusually attached to Xiaolou, his attachement feels more spiritual than sexual, and at no point does he make anything resembling an advance. Proof of this are the words of Master Yuan, Dieyi’s equally sexually ambiguous patron, who tells Dieyi “there is foulness in both men and women – only the bodhisattva embodies both male and female essences”.

Nonetheless, Farewell my Concubine falls just short of being the masterpiece it aspires to be. While it is a triumph on an aesthetic level – Chen’s camera glides euphorically through temples and city streets, while the costumes and sets are meticulously authentic – it falls short because it struggles to combine the observational, detached style of its first half with the dramatic tribulations of the second. The loss, betrayal and death caused by political upheaval fail to hit the target emotionally, despite the film noticeably straining itself to raise the pitch a notch or two. Chen’s preoccupation with fate – most obvious in the mirroring of the film’s plot in that of the opera – leaves him unable to convince us that we are watching anything other than an inevitable series of unfortunate events.