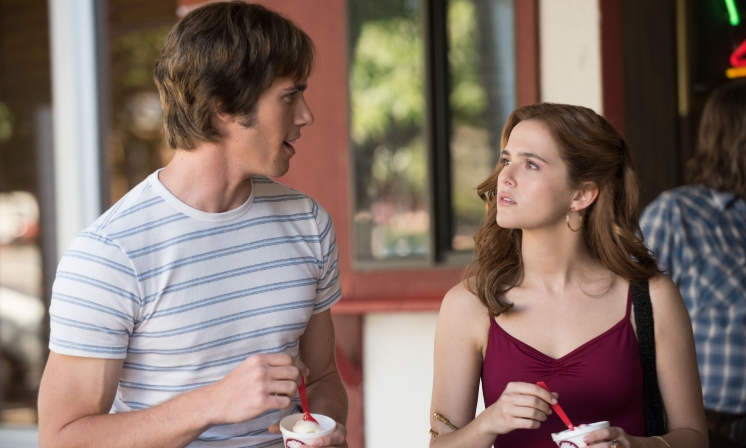 Richard Linklater once again casts his outwardly laid-back yet deceptively astute gaze on those loitering around the edge of adulthood with Everybody Wants Some!! – a joyous and often uproarious portrayal of college-age adolescence and the alluring freedom that brings. Much like the frosty and subdued welcome the film’s central character receives when first moving in to this new college residence, the film itself does take a little time to find its groove. Once it does however, that effortless charm evident in the majority of Linklater’s oeuvre comes to the fore – with more lip foliage on display than a week-long Burt Reynolds retrospective.

It’s the autumn of 1980 and Jake (Blake Jenner) is a college pitcher who has been bundled into a large property off-campus with his fellow freshman and older, seasoned teammates the weekend before first class. All are there on a baseball scholarship and have little interest in majoring in anything else. It’s painfully clear as the coach lays down the term-time ground rules to the rowdy bunch, the house restrictions on booze and babes will be immediately broken. Linklater has talked about the film being a spiritual sequel to his much-loved 1993 coming-of-age yarn, Dazed and Confused. Alongside the obvious period comparisons, the director once again uses another killer jukebox soundtrack which will have you scanning Spotify immediately after stepping out of the cinema. But the similarities don’t end there. The casual, free-wheelin’ plot and that loose hangout atmosphere are also present and correct. In fact, the students here could almost be the same group of school-aged senior paddling enthusiasts from Dazed – a little older and wiser perhaps, yet still tied to boyish, macho pursuits. But the director is also interested in flipping that overly-familiar cinematic jock archetype and alpha-male environment.

These guys are more than happy to ditch their social comfort zones and blend in wherever the night may take them, be it a disco club, a free-for-all punk gig or line-dancing at the local honky tonk. Perhaps there’s a little rose-tinted wish fulfilment here by the filmmaker as he reflects on his own college experiences, but it certainly makes for a much more interesting dissection of that demographic. There’s a deeply appealing camaraderie between the teammates, who aren’t afraid of pulling any of their wayward members into line (Juston Street’s hilariously belligerent pitcher Jay is one player who seriously needs to be brought down a peg or two). This is another tight ensemble made of largely unfamiliar faces, a number of which possess that recognisably thick and laconic Texas drawl which adds a welcome authenticity to the piece. Each performer is able to bring something compelling and unique to the material they’re working from, and like Dazed and Confused‘s players, Ben Affleck and Matthew McConaughey, ascension to full-blown stardom is surely around the corner for key members of this neophyte cast.

Befitting of that kind of masculine milieu, women tend to be comprised mostly of sexual conquests or arm candy, so it’s nice to see the film’s solo female character, performing arts student Beverly (the wonderful Zoey Deutch) is as far from a one-dimensional representation of the college hottie as you could get. She possesses the kind of confidence and intellect which Jake instantly zeroes in on and gravitates towards, offering the baseball player a window to new experiences amongst the partying and sleepy lecture halls. She’s one of the many endearing components in a film which will leave you hugely nostalgic for an era and world far-removed from your own, but one which you’ll undoubtedly feel a deep kinship with.