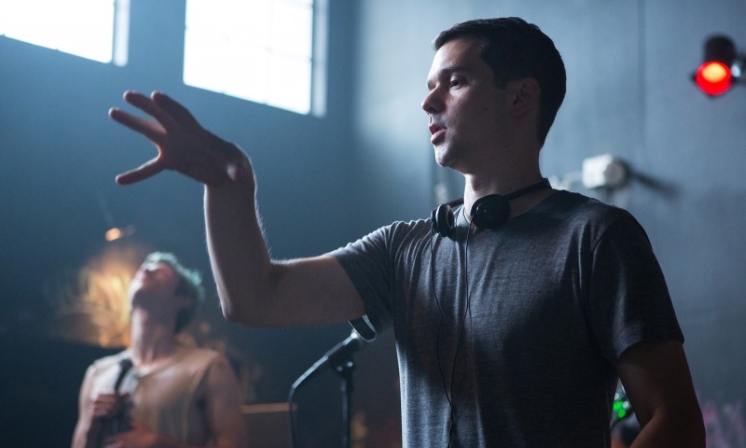 With his slow-burning revenge noir Blue Ruin, Jeremy Saulnier debuted as a startlingly original and bold young director, someone to be watched. Premiering at last year’s Cannes film festival, his difficult second album is the highly impressive grunge horror of Green Room, telling the tale of a punk band trapped backstage at a murderous Neo-Nazi nightclub. CineVue’s John Bleasdale caught up with the director to discuss.

John Bleasdale: So Green Room is the difficult second album. How did you approach it?
Jeremy Saulnier: Yes, I didn’t want to replicate Blue Ruin. I have my foot in the door of the industry to bring my evil punk rock past in with me and make this movie that was a hybrid of all my nightmares and experiences growing up. It had been kicking around my head for a decade. I have to do a film in the green room, no one’s done it yet. I did it real quick. I wrote the first draft on the festival circuit for Blue Ruin. I turned down other offers because I was getting scripts I didn’t connect to, on a visceral level. This was something I had to do and this was the only time I could do it. Now. This is a blunt force exercise in tension.
JB: It reminded me of those 80s films you’d rent on VHS and rewind the gory bits.
JS: My older cousins introduced me to this world by torturing me. I must have been nine or ten and they showed me Dawn of the Dead, rewinding the scene at the beginning with the SWAT team and the exploding head and watching it over and over again. They made me watch Friday the 13th, Part 3 with the scene with the arrow through the head. Hilarious and traumatic and fascinating. Green Room was definitely designed to be a Repo Man, a River’s Edge, or a Carpenter movie. I love that grounded vibe. That pre-CG thing. But as a testament to our visual effects supervisor, there are over 50 CG shots in the movie but because of the aesthetic, it all seems very grounded and real. They are very delicate composites, but we had great special make up effects, some of them had on camera blood pumps and gore, but some had none at all and the blood was added later.

It was very important to me that the effects seemed effortless and real and live. I’m a huge fan of the art form and so this was designed to have a gore score like Fangoria magazine. The gore has to be there, I do like it and I grew up in the Eighties when Dick Smith and Rob Bottin and Rick Baker, these amazing artists and a lot of them are no longer in the industry or they’re no longer appreciated because of all the CG, but nowadays it’s my responsibility to couple every act of violence or whatever is with an emotional component. The more gratuitous shots in the movie are of the non-fatal variety and they show some nasty meat. But when there’s a life lost I try and show a little more reverence and don’t celebrate that. Either way, I want a brutal and really emotional impact, so it’s more of a gut punch and less of a high five.

JB: Earlier you mentioned your ‘evil punk past’?
JS: I was a skateboarder from suburbia outside the Washington DC area and there was this vibrant scene five miles from where I grew up. I took a cross-country trip with my family and a friend played me Fresh Fruit for Rotting Vegetables by the Dead Kennedys and that was my very first contact. I don’t even know if I liked it but I knew I had to have it, so I dubbed over my Beverly Hills Cop soundtrack, cassette tape, and dubbed it from the record player and the guy drew the DK logo on it. My mom took me to the record shop and I’d buy Sex Pistols tapes and I’d try and introduce those in my school picnic in 1986 and I was banished because they all wanted to play pop music- I was skating and listening to punks, influenced by all these skate rats. So when I got access to music, I tried playing guitar and I failed, but I was very athletic – I was a jock who didn’t like sports – so when my friends formed bands I became a singer in one of them or more of a yeller. What I loved was though I couldn’t play music, I could sing and jump around and be in the pit and see other bands. 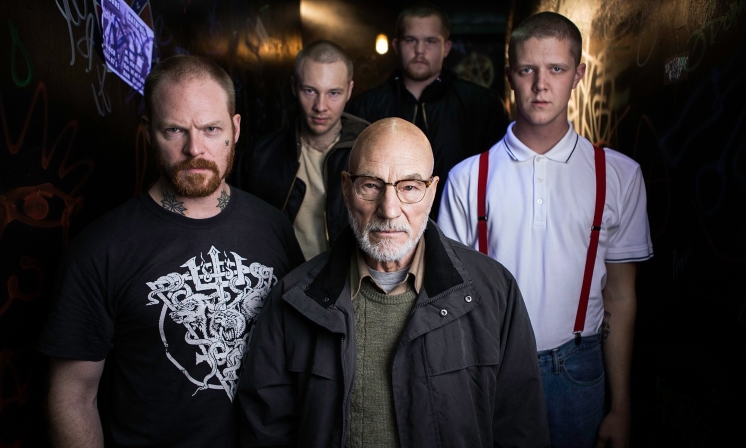 I felt a deep connection to the scene. And we’d go to Washington DC. So the Mexican restaurant scene is a show I played, a lame, under attended show. I used these real life experiences in the movie. I never had a siege situation with Nazis, but in the 80s there was a heavy Nazi skinhead scene so that at every show there would be some Nazis and it was very odd for me that this absurd ideology was carrying on. There’d be fights and stuff that would spill out into the street. And at times it would be very violent to be at these shows because there was very hardcore band crossover. The singer would brutalize people in the pit. It was very scary. So I modelled the evil Nazi band in Green Room after a band that struck fear into my heart when I was a kid. The scary thing is the skinhead white power is coming back and popping up.

JB: Were you worried at all about giving Nazis a platform, or making them look cool? You don’t really give the Nazis a speech justifying themselves.
JS: The rule I had is that the characters have to talk among themselves and never to the audience. There’s a little speech, hints here and there but we’ve seen it all before. It really wasn’t about Nazis, but ideology – there are an ultra-left wing group but they also happen to be racist – but I was more interested in dissecting the conservative mainstream power structure, the whole top down thing where there’s a very simple selfish motivation at the top and then just bullshit ideology that trickles down through the ranks and causes so much carnage in our society. People that involved are not serving their own interests, from Darcy (Patrick Stewart) the leader to the pit-bulls that cause this carnage. More about generic learned hatred and aggression.
JB: How did Patrick Stewart become involved?
JS: Patrick loved Blue Ruin and loved the tension, watched it alone in his house in London one night and freaked out, and he got the script for Green Room and he was looking for something new. I expected him to be more disruptive as a presence, as a bona fide movie star, but he was dedicated, grounded and very generous and he knew his lines, background and built the history of his character. The shoot itself was very difficult and technical. To make it look effortless took a lot of work. We built the set of the club on a soundstage, we had to shoot some remote exteriors and blend it all together. There was a lot of moving around and keeping track of continuity and so I leaned heavily on the actors to stay true to their characters and keep their level up. Especially because there’s so much coverage of the ensemble back and forth, to make that dialogue seem live and overlapping and real, took a lot of work.
JB: And you also have to work with animals. Nazis and animals, there has to be a Hollywood adage warning against that.
JS: The animals were flagged as a potential problem but we actually had no problems at all. Maybe one night a dog didn’t jump as high as I wanted it to, but that was my only complaint. They were professional, properly trained. We had this very expensive dog puppet made to get the shots that the dogs couldn’t do and in the end we only used it for one shot.
JB: What was the biggest challenge?
JS: The logistics, scheduling and union rules. To get a dozen hard working actors in the same place at the same time is difficult. We had actors come in and drop out. But it all worked out great. In fact we had a fantastic actor who was cast as Sam which was written for a boy, but he dropped out and we opened it up to boys and girls and that’s how we got Alia Shawcatt (Arrested Development). When she came in we didn’t change a word of dialogue but she owned the character. She knew how to play music, she’s a good friend of Anton. Geena Davis wrote an article saying: just cast women in roles, don’t think of them as male or female; and I did and it worked.
JB: As well as the tension, the film is very funny. There’s a great fart joke.
JS: The fart was real. It was scripted but he surprised Alia by doing it for real on set, but then we had to ADR the line but we copied exactly what happened. Fart jokes are very base but you cannot have a band on the road, dudes in the van, without a fart joke.
JB: So, the question asked throughout the film: what is your desert island band?
JS: Black Sabbath. I had a good friend who gave me that question. And I had another who was into Prince and Simon and Garfunkel.
JB: When I got into punk I had to move my Pink Floyd records out and make way for the Buzzcocks and Wire.
JS: And now do you want your Pink Floyd back?
JB: Yeah I want both.
JS: I don’t listen to Viral Threat when I’m in my house. I used to love going and seeing Fugazi but now I’ve got kids. Though, that said, I have introduced them to Black Sabbath. And the song Black Sabbath in particular.
JB: So what’s the next project?
JS: I’ve got a few lined up. One is too big for me to tackle. And I’ve got the idea for another script which will be very different from Green Room. It has a romantic element to it and a bit of adventure, but it will still be grounded. I like to explore very typical Hollywood scenarios but the underbelly of it. I find more life there. They gloss over the fun parts, cutting to the pyrotechnics or they make it really choppy to serve the pacing rather than the content. I like screeching things to a halt once in a while and have a conversation. One day I want to do a big studio film but it has to be the right one. I don’t want to do robots fighting each other. I’ll watch it but I want to do something that I can justify. I like the Bourne trilogy for example. But until then I’m not waiting. I’ll write my own scripts.