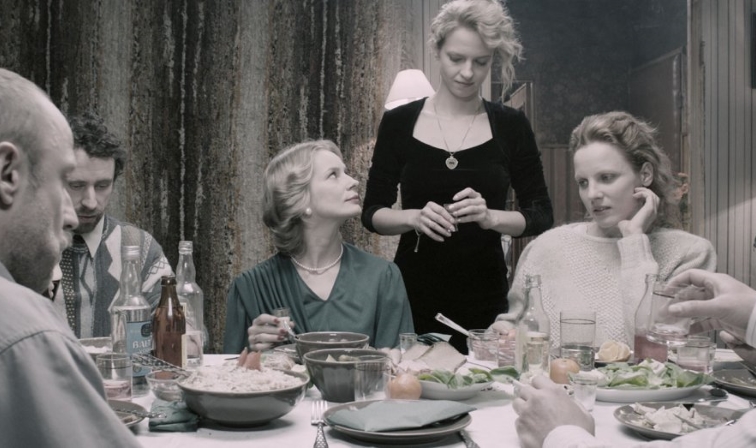 Back in 2013, Polish director Tomasz Wasilewski screened his sophomore feature Floating Skyscrapers at the Transilvania Film Festival. This daring tale of an intense gay romance in a staunchly Catholic nation saw Wasilewski walk away with the best director award. This year he’s returned to serve as a jury member, bringing with him his follow-up, United States of Love. A powerful study of four women’s fruitless search for fulfilment in post-communist Poland, it builds on the director’s previous exploration of repressed desire.

Set at the beginning of the 1990s, as the Soviet bloc was beginning to crumble and Poland was started to embrace capitalism, United States of Love follows four women as they navigate their own personal crises. After years of stagnation, their homeland is beginning to succumb to the influence of Western culture, with VHS copies of American movies available alongside pornography in the local video store and Whitney Houston posters adorning the walls of their Soviet-era apartments. Ironically, whilst the country is experiencing an ideological thaw, these women living are all struggling to adapt to their newfound freedom. The lives of these women gradually become invisibly entwined.

Agata (Julia Kijowska) becomes infatuated with the town’s priest, and spends her evenings secretly observing him before going home to sleep with her husband. Her daughter goes to the local school where Iza (Magdalena Cielecka) is the principle. Iza has been having a long-standing affair with a married doctor, but when his wife dies their relationship is temporarily put on hold for the sake of his daughter. Meanwhile, Iza’s colleague, the school’s Russian language teacher Renata (Dorota Kolak) tries to develop a more intimate relationship with her young neighbour Marzena (Marta Nieradkiewicz), a dance and aerobics teacher who dreams of making it as an international model. These women are all loosely connected, either as sisters, neighbours or work colleagues, but it’s their inability to find fulfilment that unifies them.

Despite being given the unenviable task of expressing the inner chaos raging behind the brittle façades these women have constructed to adhere to society’s conservative views towards sexuality all four actors deliver impeccable performances. The projection of isolation is at times unbearable to watch, a feeling exacerbated by cinematographer Oleg Mutu’s remarkable ability to capture each excruciating twinge of loneliness with riveting accuracy. Renowned for his work on key Romanian New Wave films The Death of Mr Lazarescu and 4 Months, 3 Weeks and 2 Days his distinctive palette of bleached-out greys and blues and highly formalised framing drains what little life there is in these concrete socialist-era apartments, leaving the film with an icy, almost anaemic look that’s so chilling it sends a shiver down your spine.

Although United States of Love adheres to the austere-realist aesthetic audience have grown to expect from Eastern-European films concerning life after communism, there’s an abundance of empathy behind the bleak veneer. Mutu is a honed observers of female subjectivity and he seamlessly taps into the continuous struggle at the core of these women lives as they attempt to repress their feelings. Wasilewski’s juxtaposition of the inability to self-actualise with the death of a society paints a suffocating portrait. The film’s compassionate understanding of female desire has led to comparisons with the work of Fassbinder and Kieślowski. There’s no denying that Wasilewski is one of cinema’s most promising new voices.

The Transilvania International Film Festival (TIFF) runs from 27 May to 5 June 2016.