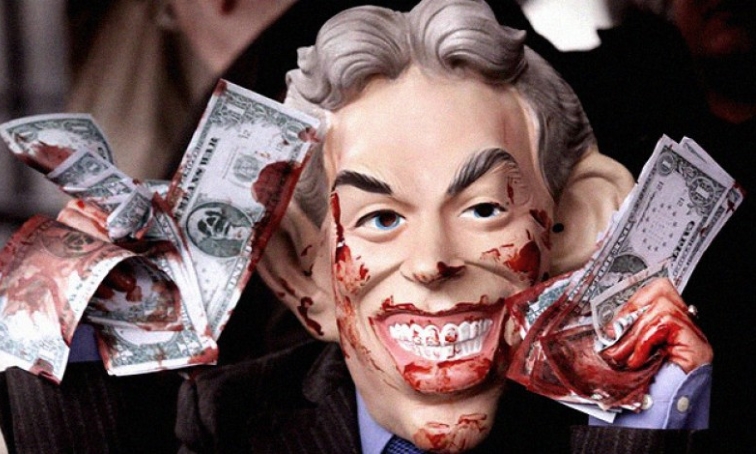 A documentary fronted by George Galloway, who narrates The Killing$ of Tony Blair as if he’s recounting a horror story around a campfire, must be taken with a grain of salt. A bitter Labour party reject, who has his own form currying the favours of dictators and obfuscation, Galloway’s re-emergence as a voice in the political sphere should be deemed as nothing other than opportunistic caterwauling. For all the legitimate criticisms of Blair and New Labour – and there are plenty of those – Sanne van den Bergh and Greg Ward’s film has the depth of an animated SWP meme running on a loop for 90 minutes.

Opening with a montage of Iraq atrocity footage and beginning with the end, the end being Blair’s premiership resignation in 2007, and the subsequent role as an envoy and after-dinner speaker, his fees used as examples of the man’s sheer avarice (Galloway quipping the film could be titled ‘The Blair Rich Project’), the doc builds on a repetitive fixation with the man’s perceived greed mixed in with a one-sided depiction of his premiership (which Galloway deems a gross betrayal of Labour values). At one point, Galloway declares it was Blair’s secret mission to destroy Labour from within. Labour became an electoral power winning three general elections in a row for the first time in its history. New Labour implemented – as a Labour party can do in power – a range of progressive, forward-thinking policies. But the doc is far more interested in Blair’s internationalist meddling and media associations, so the bits about successful domestic policy are somewhat mealy-mouthed and brushed over after about a minute’s worth of discussion.

The Killing$ of Tony Blair is a selective portrait of a monster fit for a ‘Stop the War’ rally and it’ll appeal directly to true believers for whom New Labour and Blair were an aberration. The documentary takes his personal accruement of wealth – he owns 31 homes, apparently – as an affront. But this, too, like other aspects, is on very shaky ground. “Blair was simply enchanted by money,” Galloway intones, but when attempting to discuss tax arrangements and potential tax-dodging it’s explained “he’s doing this and he’s that,” not his tax people. As a very low-budget effort, deploying graphics to explain away the points it wishes to make is a non-option, so by default opts to commit the same sleight of hand as a shadowy off-shore tax accountancy firm.

Often, the film acts as if Blair’s various shady dealings are all so complex and boring that detail is irrelevant, when detail is what we all need to understand to make a valued judgement and form an opinion. Too many times, it relies on Galloway’s cheap shots, heavily biased quips and iffy summaries. While there is plenty of non-Galloway interview segments and footage, Will Self makes compelling comments, and so does Lauren Booth, Tony’s sister-in- law, if you hate Blair already and won’t have it any other way, The Killing$ of Tony Blair will reaffirm said hatred. A more serious study and film may one day come.